Rock ‘n Roll is live, fresh on the beach Sunday 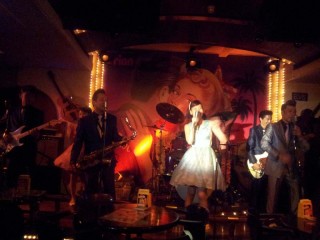 The golden age of the 50’s and 60’s comes alive Sunday with a beach party and concerts at Chatan’s Araha Beach, featuring the Gold Disc Club’s house band Dynamites.

The oldies but goodies are a specialty of Naha’s Gold Disc Club, formerly known as Kento’s.  Two shows are set for early evening, featuring hits of artists Elvis Presley, Chuck Berry, Connie Francis and many more, all performed by the Dynamites.  Gates open at the beach at 6 p.m., with the first stage at 6:30 p.m. and a second stage at 7:30 p.m.

The Dynamites will be performing the same oldies music as they do nightly at the Gold Disc Club in Matsuyama Naha.  Their style is the same, and dancing will be taking place on the beach during the concert, too.