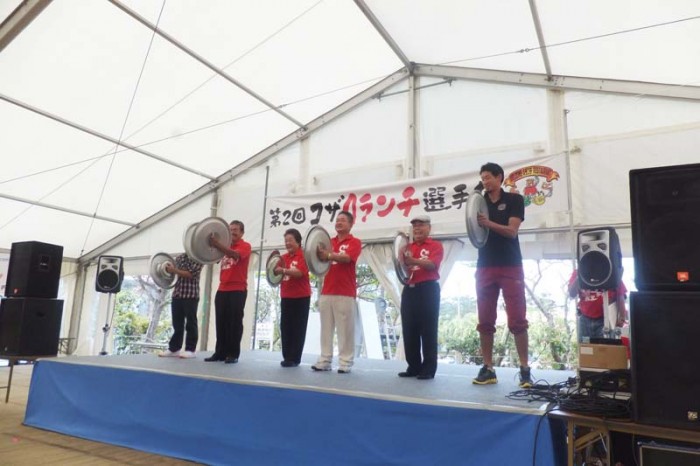 What began as an opportunity to ‘show off’ culinary skills by a group of Okinawa restaurants has turned into a really big deal; so big, in fact, the A-Lunch Championships has had to move to a bigger venue.

The two-day opportunity to taste the handiwork of dozens of Okinawa restaurants takes place at the Okinawa Zoo & Museum from 10 a.m. ~ 5 p.m. both on Saturday and Sunday, Nov. 9 & 10th.

How did this all begin?  Well… 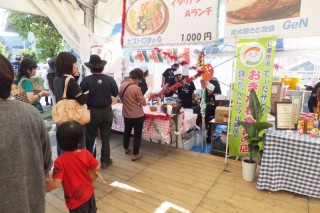 People line up for a sample lunch during last year’s event.

The A-Lunch concept began in Okinawa following World War II, when an Okinawan chef returning from New York had the idea to create an A Lunch, B Lunch and C Lunch, denoting expensive, moderately priced and inexpensive set menus.  It caught on, and is now a mainstay in restaurants in Okinawa, and across Japan, for that matter.

The competition idea began in 2011, and was a hit.  Last year’s was even more of a fascinating draw for curious and hungry patrons, drawing more than 20,000 to sample the foods in Okinawa City, which can be easily described as the heart or hub of American-style eateries and foods.  From a humble start with fewer than a dozen restaurants from in and around Okinawa City putting their best meals forward at a nominal ¥500 each, to dozens a year ago serving meals. 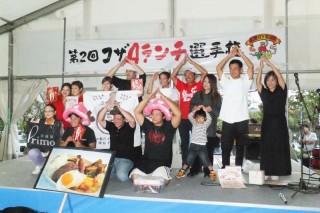 Winner celebrate their trophies at the end of last year’s event.

Which brings us to this weekend, when the Koza A-Lunch Championships again invite the general public to be the judges.  Admission to the event is ¥1,000, which includes five food tickets to pay for the samples.  Dozens of restaurants, all of which offer original A-lunches, are participating and competing.

Visitors compare tastes and decide the Grand Prix winner by their votes.  This year’s event even has television promotion, which is expected to boost advance ticket sales.

Past winners include Drive-in Restaurant Hawaii of Sakimotobu, Motobu City, which took the A Grand Prix, and the Mexican and Steak House Lima Restaurant on Moromizato in Okinawa City.  The C-Grand Prix went to Olive Batake from Awase, Okinawa City.

An estimated 20,000 meals will be prepared for the two days, served by the food corners, eating-and-drinking spaces, stores and the Okinawa City specialty corner.  Knowing that last year’s event brought 20,000 people to the event, restaurants are being sly and stocking their on-site pantries with enough food to accommodate a few thousand more.

From the A-Lunch Championships’ inception only a couple years ago, long lines of hungry customers formed in front of each restaurant and competitors worked hard cooking and arranging foods inside the cooking booths. Tacos, deep-fried shrimp, hamburger steaks, fried eggs, potatoes, sausages, spaghetti, salad, and many other items are showing up on the menus, as well as some uniquely Okinawan additions.

With 20,000+ patrons, it’s already a given that customers will have to happily wait in a line to buy meals for the discounted prices.  As the A-Lunch Championships grow in popularity, and with more restaurant participants, the real questions for visitors will be (1) should I buy only five tickets for \1,000, or go double?, and (2) how do I choose which of the several dozen restaurants to sample?