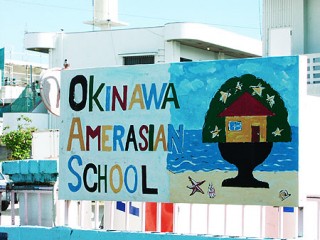 Okinawa AmerAsian School is located in a residential area in Ginowan.

Okinawa’s only school offering an English and Japanese education for AmerAsian children is celebrating its 15th year of service to the community this year.

The Ginowan City-based school is a specified non-profit corporation certified by the Japanese Ministry of Education.  It’s the only educational facility in Okinawa for children born with Japanese and foreign parents.  The school now has 75 students studying in seven classes.  Students are taught by 15 teachers.

The AmerAsian School has coined a unique definition of its status, noting “The 2 capital A ‘s represent the America and Asia, meaning we equally respect both cultures, and is also the philosophy and concept of our educational system.”

Actor Shin Koyamada and Sprouse Brothers met with students at AmerAsian School during their visit to Okinawa.

Before the AmerAsian School was established, parents had to enroll their child either in a public or international school. Parents wanted a new type of class for their international child; a double education system and that wish became reality.

With support from home and abroad, the AmerAsian School was able to establish a new education system, although still staying with the existing Japanese system. The school has received projects from Okinawa and Japan’s Ministry of Education, Culture, Sports, Science and Technology, and has registered great academic results. School principal Midori Thayer says “We can proudly say this is a new educational approach from Okinawa to the world.”

More than 400 children have studied at AmerAsian School, which now has a student population ranging from kindergarten to junior high school. The school goal is to provide double education by teaching American and Asian culture equally. By teaching both English and Japanese, the children learn to see themselves in a more positive way to see oneself even if their nationality, customs, language or appearance differ.

By interacting with other AmerAsian children, they fuel each other’s self-esteem which will help them in the future. Details on the school, which is located at1-15-22 Shimashi, Ginowan City, can be found on its homepage, http://www.amerasianschool.com.