Tonight’s the night for Beaujolais Nouveau 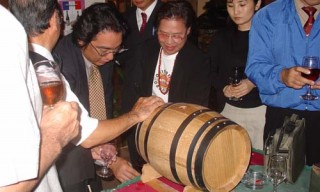 Wine lovers all over the world get ready tonight to tap open the first bottles and barrels of this year’s Beaujolais Noveau.

All around the world, wine-lovers are gathering tonight to celebrate Beaujolais Nouveau — a French wine made from Gamay grapes produced in the Beaujolais region that is released for sale after being fermented for only a few weeks.

The light wine this year promises a bright-red color and a fruity taste, and is perking the taste buds of Beaujolais Nouveau wine lovers who’ve been salivating for weeks to get a taste for the wine, which is officially released tonight, the third Thursday of November.  On Okinawa,  the Seamen’s Club Naha is hosting the annual Beaujolais Nouveau Wine Festivities beginning at 7 p.m.  .  Reservations can be still made at the Seamen’s Club, or by calling (098) 857-1753 or DSN 648-7493.  Tickets are ¥3,500 in advance or ¥4,000 at the door.  Entry includes both heavy hors d’hoeuvres and the Beaujolais Nouveau and Beaujolais Nouveau Villages wines.

The purple-pink wine reflects its youth, as it is bottled only 6-8 weeks after harvest. The method of production means that there is very little tannin, and the wine can be dominated by such fruity ester flavours as banana, grape, strawberry, fig and pear drop. The wine is recommended to be slightly chilled to 13°C (55°F). Beaujolais Nouveau is intended for immediate drinking.

The first wines began arriving at Haneda airport several weeks ago. Importer Royal Bussan is providing the Beaujolais Nouveau wines for the Seamen’s Club wine party.  In addition to tapping the first keg and uncorking the first Beaujolais Nouveau of the season November 21st, bottles of the special French wine will be available for sale at a price of ¥2,000 per bottle. The third Thursday in November traditionally marks the official debut of the new season’s Beaujolais around the world.  Because of Japan’s time zone status, it gets the first opportunities to taste the wine.

One of the Beaujolais Nouveau importers, Suntory Wine International, is estimating that Japan will bring in about 8.5 million 750-mililiter bottles this year.  The record was set nearly a decade ago, when 12.5 million bottles were sold in Japan in 2004.