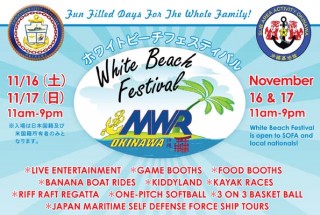 The annual White Beach Festival, an open house event that was scheduled for this weekend has been cancelled.

According to Navy MWR officials, the festival was cancelled in the last minute, because the Philippines relief effort in the wake of the destruction caused by super typhoon Haiyan is being launched from the White Beach this weekend.

The Navy MWR is looking to a possibility to held the event at a later date.