Ichiro Gushiken, a veterinarian and the owner of Animal Hospital 22 in Yogi, Okinawa City,will use this column, Pet Talk, to answer questions from pet-loving foreigners who often don’t know where to turn for advice. There’s a lot to learn and know about having and keeping a pet in Okinawa, and some of the rules differ from what foreigners may be used to. Touru Tatsuki of Animal Hospital 22 Group gets to the bottom of dealing with Okinawa’s policies concerning pets. 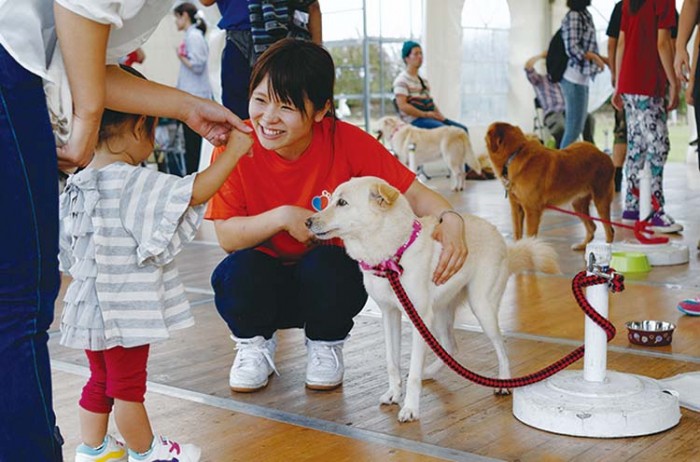 A child greets a potential new member of the family.

There’s a lot to learn and know about having and keeping a pet in Okinawa, and some of the rules differ from what foreigners may be used to.

Touru Tatsuki of Animal Hospital 22 Group gets to the bottom of dealing with Okinawa’s policies concerning pets.  Animal Hospital 22 regularly has Dog and Cat Giveaway Booth at events to help people adopt a pet.  The group’s latest booth was at the Marine Park in Nishihara on November 10th. A total of 115 cats and dogs were up for adoption “and gratefully we were able to save 45 lives.” 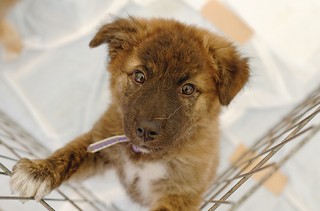 Almost 6,000 cats and dogs are put to sleep each year in Okinawa as strays.

In Japan most cities, towns and villages receive a call to capture and shelter pets found on the streets. Here, captured pets are held in the Okinawa Animal Protection and Control Center for 3~7 days and if the owner does not appear, the pet is put to sleep. In Okinawa 5,728 cats and dogs are put to sleep each year. “This is why we started the Dog and Cat Giveaway Booth,” Tatsuki says, “to be able to save at least one more life.”

There are many reasons and situations that people are unable to continue to take care of their pet. Here are some examples of people who came to Animal Hospital 22 events:

1. A senior citizen who started to take care of a pet got sick and needed to be hospitalized and there was no one to care for the pet.

2. Five puppies found at an office. The office workers tried to find a home for them and they all pitched in to get the puppies vaccinated.

3. A family’s child found a kitten, but since they live in an apartment, they cannot continue to care for the kitten.

“All participants love animals, which is why they come to the events to find a new home for them.  Our staff also participates,” Tatsuki explains, “and we get to see the moment each pet is welcomed to a new home. Let me tell one of our stories. “At one of our events, someone brought a dog which was over two years old. Normally, adult dogs are very hard to receive a new home. 4~5 hours into the event, there were three middle aged men and women petting the dog. They did not leave the dog’s site and continued to whisper into the dog’s ear. This is something, which we often see at these events so I didn’t take much interest in them.”

Tatsuki continued “After 20 minutes when I passed in front of that dog, I was stopped by the man and woman who were petting the dog. ‘We would like to take this dog with us, can you tell us what we need to do?’ I guided them through the paperwork for adopting the pet. I returned to the dog and found the other woman there. When I saw her face and she saw mine, suddenly her face went to pieces with tears. That’s when I realized that they were not going to adopt the dog, but she was the one who was letting the pet go.

“The woman was petting the dog on the head saying. “Thank goodness, thank goodness”, and the tears couldn’t stop running from her eyes. It seemed as though the dog also understood this was going to be the last time he would see his owner because he had such a sad face. I too couldn’t stop myself from crying and had to leave. After finishing the paperwork, the new owner went home with their new pet and former owner continued to see them walk away until they disappeared.”

Tatauki says “We are always looking to people who want to adopt a pet who can no longer be taken care of. But unfortunately, this action does not result to decreasing pets in need of a new home. To actually save a pet is to make more people understand that it is another life they will be taking care of and have the responsibility to take care of the pet until the end.”