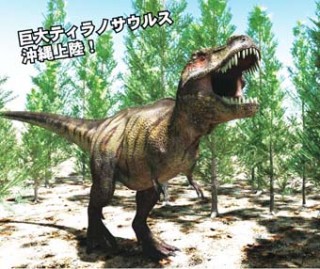 Tyrannosaurus Rex is among dinosaurs on display in Neopark in Nago.

The monstrous Tyrannosaurus has landed in Okinawa, and everyone who wants to see it, along with other life-size replicas of dinosaurs, can make the trek to Neo Park Dino Kingdom any day through February 11th.

Many dinosaurs are on display during the period, including the triceratops and others. The life-size replicas of the ancient reptiles have animation mechanisms that make them move for a more life-like effect. There will also be a 3D dinosaur movie playing, to actually experience dinosaurs as if they have come to life.