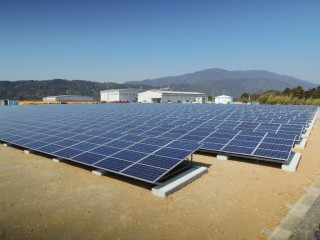 Solar panel fields have popped up on many landscapes in Okinawa’s rural areas.

Photovoltaic generation planned on the main island of Japan’s Okinawa Prefecture is expected to reach the capacity of Okinawa Electric Power Co. as early as this month.

The industry ministry said this week that  thee local power company can accept up to some 57,000 kilowatts of electricity generated by solar power, the amount equivalent to power an estimated 19,000 households.  Beyond that, electricity supplies that exceed the acceptable level may cause problems, such as unstable power voltage. Output from solar power generation fluctuates sharply depending on weather conditions.
The Okinawa prefectural government and Okinawa Electric Power plan to install a large-scale storage cell that will help the utility cope with fluctuations in solar power output. The project may raise the company’s capacity by some 10%, according to the ministry.