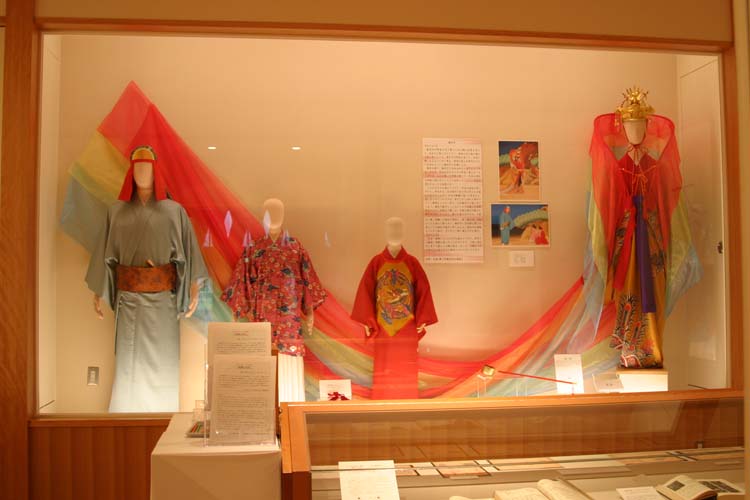 The exhibition showcases masks, costumes and pictures of Kumiodori and Noh performances.

The 4th Noh and Kumiodori Exhibition began a two-month run at the National Theater Okinawa on Saturday.

The free exhibition will run daily through March 16th at the National Theater Okinawa, which is located just outside Camp Kinser’s south/back gate.  The exhibition runs 10 a.m. ~ 6 p.m.

Kumiodori is a theatrical performance where a story is carried out using lyrics, music and dance. Chokun Tamagusuku, 1684-1734, is credited for creating Kumiodori. He was appointed Odoribugyo in 1718 during the times of the Ryukyu Kingdom. It was created with Okinawa’s indigenous performing arts and tradition as its basis, with influences from mainland Japan’s Noh and Kabuki in order to entertain the Chinese envoys, “sapposhi”, coming to the coronation of the new king.

Sappo — the tributary system in which the enthronement of a king would be granted by imperial edict from China —  was first performed in 1719 at the feast held after King Sho Kei’s enthronement ceremony.

In this exhibition visitors will be able to enjoy tools, masks, costumes and pictures of Kumiodori performance “Onnamonogurui” and  “Mekarushi” and Noh performances such as “Sumudagawa” and “Hagoromo”. Typically original Kumiodori plays had no written dialogue but only general storyline and actors improvised the dialogue as the plot proceeded. In modern times a written dialogue has been added.