Shisa are ever vigilant protectors of Okinawa 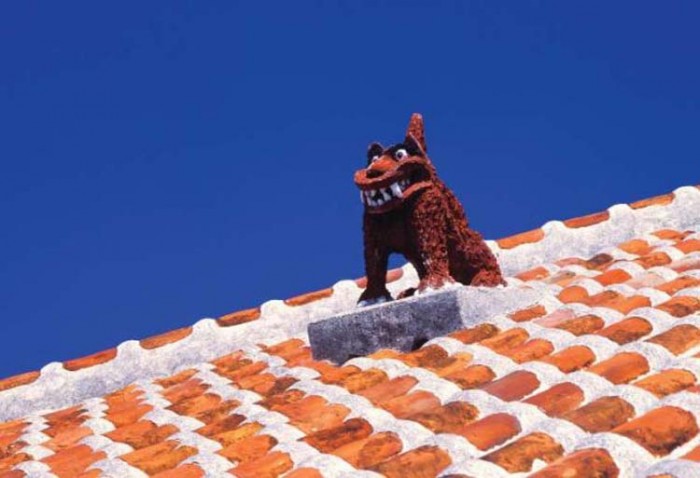 Almost every rooftop on Okinawa has a shisa standing watch.

You might have noticed that almost every entrance and gate way of a typical Okinawan house is occupied by two statues.  These statues are protecting the household, and they are called Shisa.  The statues resemble a cross between a lion and a dog, and there are always two of them, a male and female.  The Shisa with the open mouth, the male, is to scare away evil spirits, while the closed-mouthed female Shisa keeps in the good luck. 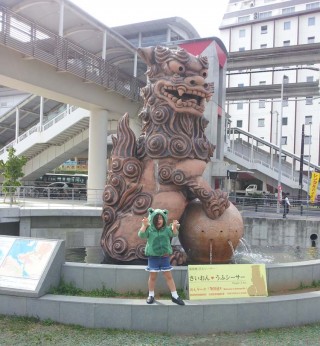 Shisa is ubiquitous in Okinawa, some small and some really big like this one at Saion Square in Naha.

The Shisa are prominent in East Asian countries, but the Okinawan version of the Shisa is in my opinion the friendliest looking.  Other Shisa in countries such as Taiwan and China have a fiercer and scarier appearance, but the Shisa on Okinawa has some friendly dog–like characteristics.

Another place the Shisa is kept is the roof of a house.  You may notice when driving through Kochinda Town that all the Shisa on the roofs face Mt. Yaese.  The legend describes that long ago Kochinda Town residents were experiencing evil spirits coming in the form of fire from the Mt. Yaese.  There were constant fires in villages nearby.  One day, a Feng Shui master named Saioizui was sought out to explain these mysterious fires.  The master claimed that all the fires were coming from the evil spirits from Mt. Yaese and that all villagers needed to face their Shisa with open mouths in the direction of the mountain.  When the villagers complied, the fires ceased.  To this day as you drive through Kochinda Town you will notice that all the Shisas face in the direction of Mt. Yaese. 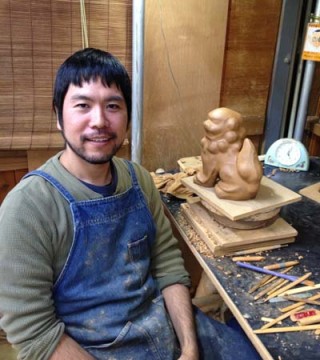 Professional shisa maker Yoshitaka says that in order to be effective, shisa “must be created in Okinawa.”

This is not the only time the Shisa has been used to ward off evil spirits.  Another legend describes that in Naha City at the Naha Port Bay, the village of Madanbashi was often terrorized by a sea dragon that supposedly ate villagers and destroyed property.  The King of the Ryukyu islands ordered that a large stone set of Shisa be constructed.  It is said that the Shisa shook a massive boulder that fell from heaven onto the sea dragon’s tail, and it can still be seen today near the Naha Ohashi Bridge.  The large stone set of Shisa now protects everyone from the sea dragon’s evil spirit and other threats.

If you are wondering where some of your bad luck is coming from, it might be a good idea to get a set of Shisa.  You have two options; either purchase your Shisa from a store, or make your own.  If you purchase them from a store, just ensure that they are created by an official Shisa creator.  Yoshitaka-san, owner of Zukeyama Company in Urasoe City, creates Shisa for a living.  He tells us, “a Shisa that wasn’t created in Okinawa will not ward off any evil spirits; instead, you will actually attract more evil”.  You can also make your own Shisa.  This can be a lot of fun and is a great activity for you and your family while living on Okinawa.

So the next time you are in Kochinda Town or simply walking past a house in Okinawa, take a closer look at the Shisa.  You can be comforted knowing that good work is being done.  Even though you cannot physically see how many evil spirits and other threats they are warding off, you can rest easy knowing that the Shisa are protecting us.