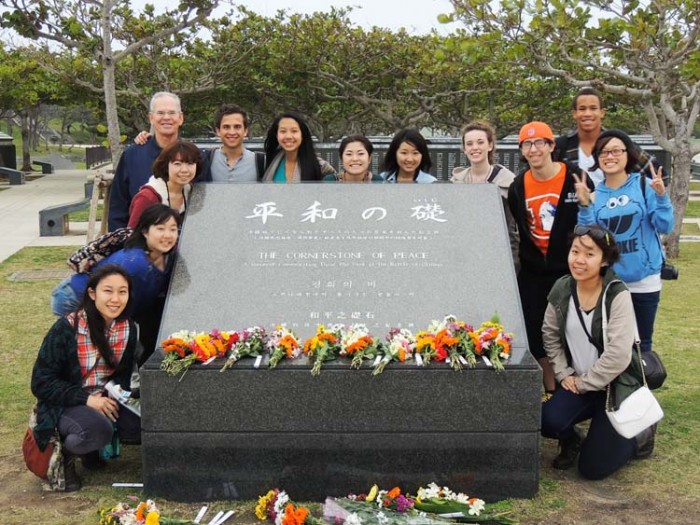 A class of twelve students and one faculty member from Soka University of America, an international liberal arts university located in Southern California, are in Okinawa this week and next to study firsthand the discrepancy between popular perceptions and actual outcomes of the ongoing presence of U.S. military forces on the island. They have meetings planned with a variety of local government officials and civic organizations, politicians and journalists, commercial and industrial leaders, high school and college students, teachers, and administrators, as well as military authorities to gain a deeper understanding of the impact of U.S. military forward bases on the cultural, economic, and political life of our island-prefecture. The group is interested in learning as much as they can about what they believe is a complex, finely nuanced and sometimes antagonistic relationship between Japan, Okinawa and the United States.

Their research questions include but are not limited to the following:

What are the United States ongoing strategic interests in Okinawa? How do modern Okinawans themselves, including politicians, civil society organizations, businesses, and ordinary citizens, perceive those interests?

What is being done to reconcile a large and ongoing U.S. military presence on the island with demands for greater local control over the current conditions and future destiny of the Okinawan people? What are the burdens of that presence, especially on the human and physical environment, and what is being done by both U.S. and Japanese authorities to reduce them?  What does it mean to create a culture of peace in Okinawa? Is there resentment that must be overcome between local Okinawans and American soldiers?  What are people, institutions and organizations on all sides of the basing question doing to uphold and enhance what is valuable and distinct about the culture and history of Okinawa? To the extent that it exists and can be measured, what is the nature of pro-base sentiment on the island? What are its arguments? Are those arguments taken seriously by the opposition and if so, what does the process of consensus-building look like between pro and anti-base elements on the island? Is there any room for compromise between parties to the debate or has this discursive space been compromised out of existence by the strong visceral memories of the war and its tragic consequences?

Okinawa is often described negatively as a dependent economy, dependent since reversion more or less equally upon the economic assistance of mainland Japan and the many jobs afforded by a large, co-dependent U.S. military complex. What sort of sacrifices would conversion to a peace-time, demilitarized economy require of Okinawans and to what degree are they ready and willing to make these sacrifices, especially when presumably there would be little countervailing economic support from a Japanese government sworn to upholding the Japan-U.S. Security Agreement?

Soka University of America is dedicated to the values of peace, human rights and the sanctity of life. In keeping with its mission to “foster a steady stream of global citizens committed to living a contributive life” these students say they are here to learn from Okinawa and Okinawans how to deepen their commitment to the above mentioned values and objectives. To learn more about this unique course in the Soka University of America curriculum, please visit www.soka.edu/academics/learning-clusters.aspx