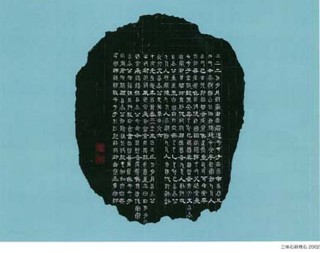 Three sutras in stone is an example of Takezaki’s works.

Kunii Takezaki, a modern-day calligraphy teacher, is showcasing her collection at the Naha Civic Gallery on Palette Kumoji’s sixth floor through Sunday.

The Calligraphy Art Collection is open to the public from 10 a.m. ~ 7 p.m. each day.  Takezaki is known for her calligraphy and teaching styles, having taught on bases in the past. She’s also performed and taught calligraphy in a number of foreign countries, and has even received a letter of appreciation from former U.S. President George W. Bush, who’s taken up art himself since leaving the White House.

Takezaki’s book Japanese Kanji Calligraphy was published in October 2005, and she has performed in Hong Kong, Fzhoue, China and in Singapore.