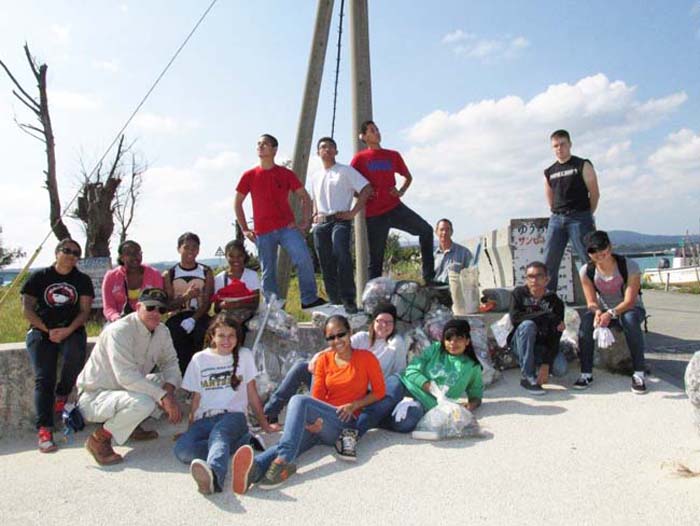 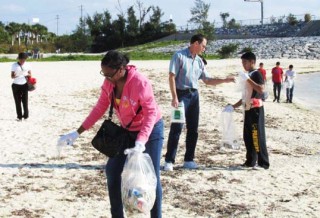 About 200 kg of trash was collected and cataloged.

The Cadets have been participating in cleanups since the beginning of the I Love Okinawa Campaign® in 1993.  We applaud their positive community efforts.  They used the International Coastal Cleanup (ICC) Data Cards to let us know what was found.  Twenty-two bags were filled with 200 kg collected in about 700 meters of beach area.  This cleanup will be recorded on the Okinawa Clean Coast Network’s (OCCN) webpage.  OCCN is managed by the 11th Division HQs. of the Japan Coast Guard.

The Ryukyu ICC Data Cards are used to record data for the World Report between September and November in Okinawa.  The Okinawa International Clean Beach Club (OICBC) will lead The Ryukyu ICC as part of the I Love Okinawa Campaign®.

Mr. Tamaki from the Reseto Company right off the bridge and rest area, is the designated point of contact for Kouri Island and serves as liaison for visiting groups.  Communication with gestures and smiles proved sufficient to get the cleanup started.

Kouri Ocean Tower opened last year offering a great view of the area.  The Kouri Island Magic Hour Run is just around the corner scheduled for April.  Now with the Lunar New Year (Jan. 31st) it’s a good time to practice your trot and gallop towards getting fit.

This week will be the last column written under NPO Okinawa O.C.E.A.N. as the organization will be under new management from Apr. 1st 2014.  From next week, the I Love Okinawa Campaign® will operate independently along with the original Okinawa International Clean Beach Club.  Life’s a “clean” beach and then you sail on…