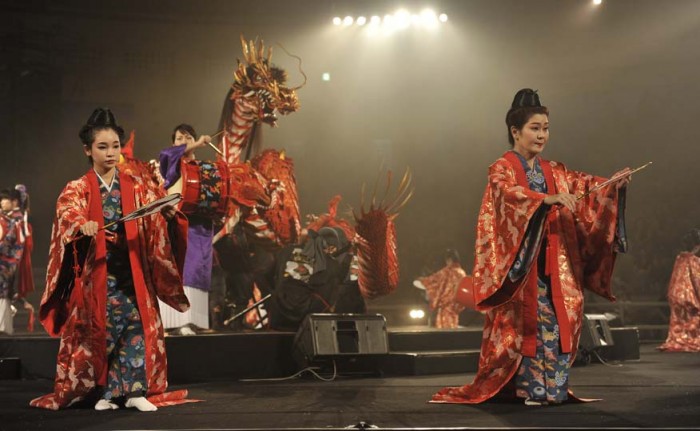 Dragons are at the heart of  the Ryujin no Utage Show.

In ancient times of the Ryukyu, it was said Ryujin was a God who reincarnated into a dragon, and was the one who controlled and governed the water. 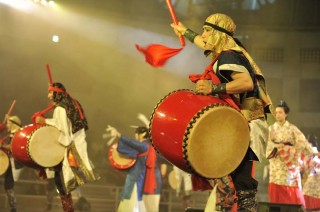 Taiko drums are important for the impact of the performance.

Ryukyu Densetsu, which has performed both inside and outside Japan, is leading this concert performance, incorporating dragon theme throughout the show. Also performing will be Taiyo-fu Orchestra that mainly performs instrumental music with a motto of providing Okinawan rhythms to the world. Other artists taking part in the show are Hidekatsu, Kozue, Aria, Yuko Miyagi, Ryuta Shiroma, Ryukyu Matsuri Odaiko drum group, Chijinshu Waka Taiyou, aanother drink group, and original Eisa dance group Lequios.

Doors open for the concert at Ishikawa Dome, better known as a frequent arena for Okinawan style bullfighting tournaments, on Sunday at 4:30 p.m. and the show starts at 6:30 p.m. Advance tickets are ¥2,500 for adults in advance or ¥3,000 at the door.  High School, junior high school and elementary school students enter for ¥2,000. Admission is free for pre-school age and younger.

To get to Ishikawa Dome take Hwy 58 north from Kadena. After passing Okinawa Renaissance Resort, take the road towards Ishikawa. The silver color Ishikawa dome is on the left just after you pass under the elevated Okinawa Expressway. Free parking is outside the dome.