Sanshin is great communicator when in Okinawa 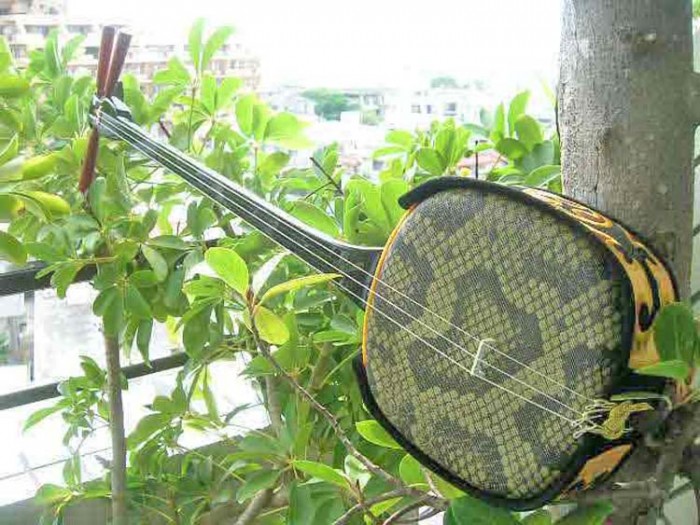 Okinawan sanshin is a very simple instru-ment with three strings.

The best-known Okinawan instrument is Sanshin, also known as the Okinawan banjo. Shamisen in Mainland Japan is its close cousin.  The neck of the Sanshin instrument was originally made of extremely hard locally grown wood called “Kuroki,” and its voice box covered with snakeskin from a python that even in ancient times was imported by Okinawan traders from South-East Asian countries. 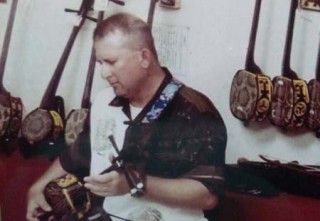 American Duane Burk has found sanshin to be a good starter of communication with locals.

However, as kuroki is increasingly impossible to find on Okinawa, and prohibitively expensive, imported hardwood has replaced it in construction of sanshin necks. Legal export-import rules and wildlife protection treaties, have forced sanshin makers now cover the instrument’s body with a snake-like patterned nylon cloth.

The Sanshin is a three-stringed instrument that is plucked using a guitar pick or a more traditional pick that wraps around the index finger called “batchi.” The three strings range from thick to thin and are referred to as the male string, middle string, and the female string.  The sound of the Sanshin creates a very peaceful mood with an island sound, which reflects the heart of the Okinawan culture.

Ryukyuan are folk songs originating from the Ryukyu Islands (Okinawa Prefecture).  “Shima uta” translated literally is “Island Songs” and is a term for Ryukyuan folk songs played with the Sanshin.  During the summer the Sanshin is played all over the island for the Eisa Festivals.  The sound of the Sanshin along with the Taiko drums, hot weather, and Eisa dancing is a pleasure that seems to make time stand still. 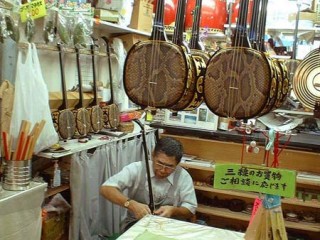 The best place to buy a sanshin is a specialized shop, which will also give tips on playing and maintaining the instrument.

Although the Sanshin may seem intimidating due to its long history and indigenous nature, you do not need to be Okinawan or be particularly musically inclined in order to learn to play the Sanshin.  Duane Burk, a US citizen living on Okinawa, often plays the Sanshin on the Sunabe Seawall.  His skill playing the Sanshin surprises many local residents and often attracts a crowd of listeners.  A conversation with Duane reveals that it is possible to learn to play the Sanshin with no special classes or instruction.  Duane is self-taught.  One day he simply picked up the Sanshin because he wanted to play a song that he heard and really liked.  Within a week, Duane had mastered the song and was moving on to learn the next song.  By this token, the learning curve of the Sanshin seems less daunting than many other instruments.

Duane goes on to say that learning the Sanshin has been a wonderful experience.  “I love the surprised faces of the older generation when they hear me play, and I love how it brings both of our cultures and generations together.  I end up playing for hours for them while they sing and tell me stories of their lives”.

Most Sanshins are quite inexpensive, but traditional Python skin Sanshins with real Kuroki neck carry a hefty price tag.  Some really interesting Sanshin shops can be located on Okinawa, and simply taking a stroll through some of these shops can give insight into the Sanshin and Okinawan culture.

The Sanshin is a great way to connect with the Okinawan culture as local residents always appreciate someone taking the time to learn something about Okinawan culture.  It is an amazing way to bridge the gap between cultures and a fast way to make new friends. The Sanshin is one of the most beautiful sounding instruments, and this in combination with a sandy beach, some ice-cold refreshments, blue ocean view or a sunset and you have, in my view, a little slice of heaven.