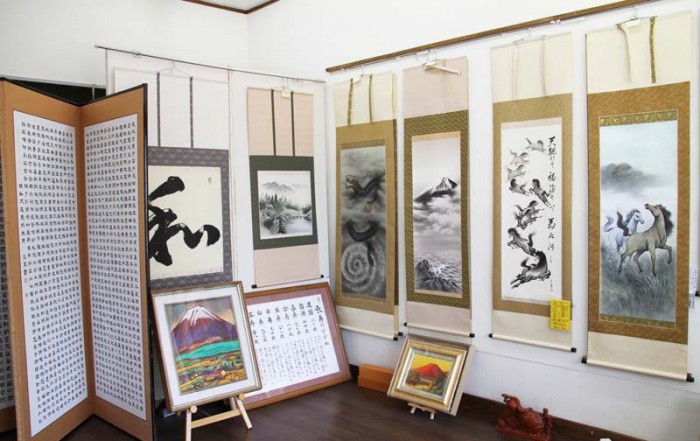 Yu-sui-do has a large selection of “kakejiku” scrolls.

Many people looking to buy a gift for a friend or a souvenir for themselves want to get something that really reminds them of the time when they lived in Japan.

Fortunately, one of the most popular Japanese items that doesn’t cost a fortune is a “kakejiku” scroll. Kakejiku are scrolls that are usually hanging on the wall of a “tokonoma”, a small alcove-style recession commonly found in the best room of a Japanese house, which is used for receiving and entertaining visitors and on festive occasions.  It usually corresponds to what westerners call a living room. American architect Frank Lloyd Wright famously translated “tokonoma” into a fireplace in his designs. 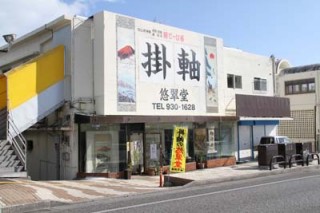 Yu-sui-do is easy to recognize and located near Plaza House shopping center.

“Kakejiku” originally came to Japan from China sometime in the 6th century with Buddhism, and depicted Buddhist images. As they spread and became more common, a wider variety of images started to appear, including nature, various creatures and animals, calligraphy, Japanese gods and more. Nowadays people who appreciate “kakejiku” change the scroll to correspond to each month or season.

Thus “kakejiku” has became one of most treasured items of the family, and it’s said that in case of fire or some other disaster, people immediately roll up the “kakejiku” and take it with them when they escape the house.

Yu-sui-do is a small shop located near Plaza House shopping center that specializes in “kakejiku.” For those with a favorite calligraphy written by someone, Yu-sui-do can set it into a “kakejiku” framing. Or one can go and ask them to write his or her name in Chinese kanji characters, and make a “kakejiku” of that. Yu-sui-do’s specialty is to write your name in Kanji with phonetic equivalent, and choose the characters with the same meaning as your original name.

Yu-sui-do owner Eiko Makishi says that it seems foreigners often hesitate to enter a Japanese shop. “We welcome very much anyone to enter our shop even just to take a look inside,” she says. “We have many “kakejiku” on display, and also calligraphy. I really enjoy talking to visitors, so please feel free to visit the shop. I want you to really feel Okinawan and Japanese culture here,” she assures.

Yu-sui-do is open 10 a.m. to 6 p.m. every day. Free parking is available next to the shop, and yen, dollars and major credit cards are accepted. Yu-sui-do is located at 331 Shimabukuro, Kitanakagusuku, just about a one-minute walk from the Plaza House shopping center. Check the map at http://goo.gl/maps/HNTsJ.