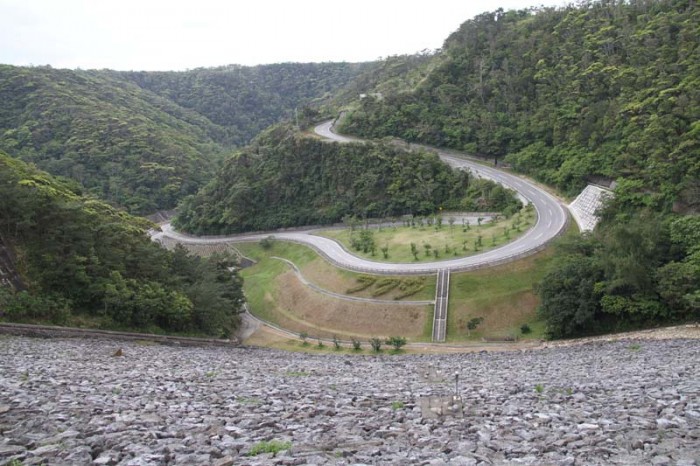 A view from the top of Fukuchi Dam’s 92-meter-high embankment.

Fukuji Dam is a rock-fill embankment dam, the largest on Okinawa and even in the whole nation.

The dam was built for the purpose of water supply and flood control, because despite rather heavy precipitation on Okinawa each year, most of the rainwater flows right into the ocean.  Before Fukuji and other dams were constructed on Okinawa, water shortage was almost an annual occurrence forcing rationing that lasted sometimes for weeks. 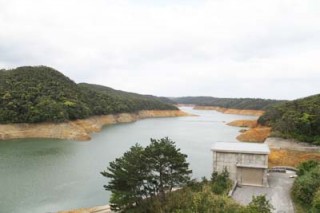 Fukuuji Dam is the largest of Okinawa’s dams.

The U.S. Army Corps of Engineers began construction of the dam in 1969 under the supervision of the Ryukyu Domestic Water Corporation. After Okinawa’s reversion to Japan in 1972, the construction became responsibility of the Japanese government. The dam was completed in 1972 and the auxiliary spillway in December 1974. The dam was later raised to accommodate an improved intake and add an additional 2.4 meters in water elevation. This additional work was completed in1991.

The dam has a 92-meter-tall and 260-meter-long rock-fill embankment. It contains up to 1,622,000 cubic meters of water, and has a crest elevation of 90 meters. The spillway helps drain the reservoir during flooding and is directly connected to the Pacific Ocean.

Fukuji Dam has a park area that is a popular sightseeing destination. There are canoes that people can rent for paddling on the dam, and a boat ride that takes visitors on 50-minute trips around the dam. The boat runs three times a day at 10 a.m., 1 p.m. and 3 p.m. Boarding costs is \1,000 for adults and \800 for children. Admission to and parking at the park are free.