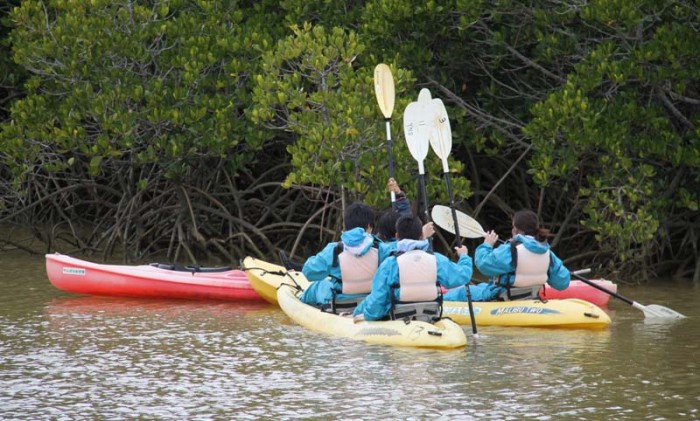 Visitors can rent kayaks o paddle along the mangroves for a close look.

There are many places on Okinawa where mangroves grow, and one of the largest mangrove forests is at the mouth of Gesashi River in Higashi Village.

The mangroves stretch about one kilometer up both sides of the river, spreading about 200 meters wide. The mangrove area covers about 10 hectares in total, and is the largest mangrove area on Okinawa’s main island. 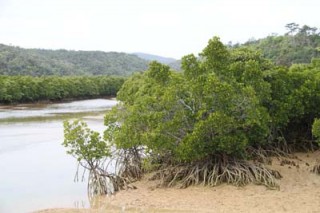 Gesashi River mangroves stretch 200 meters wide on both sides about one kilometer upstream.

Most of the mangrove that grows at Gesashi is the Kandelia obovata.  The riverbanks are covered with red mangroves, and on the upper stream there are black mangroves.

A large variety of creatures typically living in mangrove areas are also seen in and out of the river including crabs, shellfish, various types of gobies, plus river cicada and snipes.

The mangrove area in Gesashi is long considered to be one of the most diverse and valuable natural environments on Okinawa, and on Dec. 6th, 1959, the Ryukyu Government designated it as one of Okinawa’s Natural Monuments, and on May 15, 1972, after Okinawa was returned to Japan, the central government ion Tokyo confirmed its status, and it became officially one of Japan’s Designated Natural Treasures.

However, it has not been easy for the environment of the area. In 1973 during the filtration between Fukuji and Kushi Dam, it suffered some sediment inflow, and to this day inflows from pineapple fields in the surrounding area are still suspected of causing some damage. Before, tourists visiting the area caused damage by wading into the swamp on foot. Since then observation decks have been constructed on the swamp that allow visitors to take a close look without causing damage.

In the eco park there are canoes for rent that visitors can use to venture up the river and out onto the Gesashi Bay. Overnight accommodations are available, and parking in the area is free.