Two pieces of the prefecture’s traditional classical performing arts, Kumiodori, a kind of Okinawan opera, are presented this weekend at the Okinawa National Theatre.

Lord Amawari is an impressive sight in his royal regalia.

The March 22nd performances of  Kumiodori “Gosamaru Tichiuchi” and “Unnamonogurui” take place at 2 p.m. at Okinawa National Theatre, in Jitchaku, Urasoe City, near Camp Kinser southern back gate. Tickets cost ¥3,000 and are available at door only.  Of the two plays, “Gosamaru Tichiuchi” or “Gosamaru’s Revenge” tells a story of Lord Gosamaru’s two sons revenging their father murder by killing their father’s rival Amawari, who was responsible for Gosamaru’s death.  “Onna Monogurui” or “Woman in Grief” is a tale of a mother whose child was snatched by a thief, and as a result goes berserk. After she is finally united with her lost child, she regains her sanity and both return home.

Kumiodori is a theatrical performance, in which a story is carried out using lyrics, music and dance. Kumiodori was

The thief in “Onna Monogurui” looks every bit as bad as he is.

created by Chokun Tamagusuku (1684-1734), who was appointed Odoribugyo in 1718 during the times of the Ryukyu Kingdom.

The art form was created with Okinawa’s indigenous performing arts and tradition as its basis, with influences from mainland Japan’s Noh and Kabuki in order to entertain the Chinese envoys, “sapposhi”, coming to crown the new king. Sappo means the tributary system in which the enthronement of a king would be granted by the imperial edict from China. It was first performed in 1719 at the feast held after King Sho Kei’s enthronement ceremony.  Chokun created five masterpieces and the following Odoribugyo also created new pieces. At present, approximately 70 masterpieces have been identified.

The Okinawa National Theatre was opened in Urasoe City, Okinawa in January 2004 with the purposes of serving as the point of exchange for promoting tradition and culture in the Asia-Pacific region by utilizing the topographical and historical features of Okinawa, while at the same time striving for the preservation and promotion of Okinawa’s traditional performing arts, including the nationally important officially Designated Intangible Cultural Asset, “Kumiodori”. 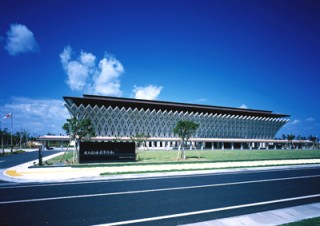 Next comes the task of nurturing successors as 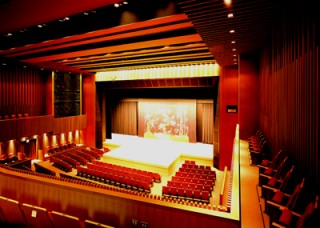 The main stage of the National Theatre.

performers and musicians for “Kumiodori”. “Kumiodori” lacks in the absolute number of performers, and the training of successors is urgently required. The Okinawa National Theatre has trainees, organizes a complete team of lecturers, and carries out a training course for Kumiodori successors under a full-scale curriculum.

The process includes research and study, document gathering, performance record making and future development and public showings. New and old scripts, costumes and props are gathered and publicly shown along with other materials on Okinawan traditional performing arts. Furthermore, efforts to gather materials from mainland Japan and the Asia-Pacific region are also made.

As with the other national theatres, the Okinawa National Theatre belongs to the Japan Arts Council. The council entrusts the administration and operation of the theatre to the Okinawa National Theatre Management Foundation. Since the foundation aims for a theater operation making the best use of the uniqueness of Okinawa’s traditional performing arts and culture, it was founded upon the support from local concerned parties.