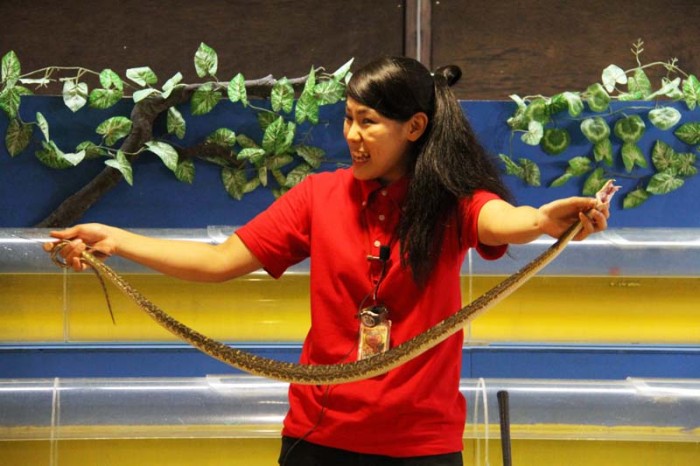 If there’s one animal that everyone on Okinawa knows, at least by name, it’s habu-snake. Although very few people ever see the venomous pit viper in the wild, just about everyone who’s even visiting the island is warned about it.’

But despite of its rather nasty reputation, habu is no worse than most other venomous snakes. Myths abound, but the reality is something else. 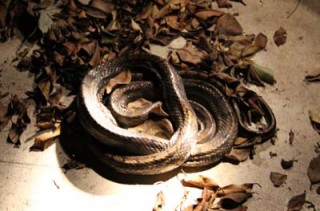 Snakes don’t move much and are difficult to spot in their natural environment.

Habu Museum inside Okinawa World in Nanjo City is a good place to find correct information about the habu. Plus, you can also see them for real at the exhibition space outside the museum along with turtles and bats. There’s also a not-to-miss traditional Okinawan habu show held several times a day in the facility, all year around.

Habu, cobras, mongoose and other animals are introduced at the show with a hint of humor. Admittedly, the habu is a highly poisonous snake, and once you have witnessed the habu’s powerful attack, you get an idea why all the warnings. After an introduction of various species of habu, there will be a habu and mongoose swimming race. Gone are the days when there were actual fights to the death between habu and mongoose. These days neither of the natural enemies is harmed in the show.

The show is conducted in Japanese only, but at the entrance of the venue, there’s a pamphlet explaining what’s going on in English that might be helpful to check out before enjoying the show.

This spring, a special project takes place at the museum that allows visitors to see the snakes close up. The Japanese name of the project may give you an idea on what it’s all about as it translated to something like “There are snakes over your head!!!” Walking in the facility, visitors actually notice them above their heads, and that certainly is a thrilling experience.

Safety comes first, so there is no chance to get bitten. And the staff will be there to support in case anything happens. Snakes don’t usually move, and one might think they’re fake, but they are not. They are all real and alive!

There’s also a chance to take pictures with non-poisonous snakes around your neck. It’s a chance to interact with this animal, which, according to Chinese beliefs, is a creature bringing good luck.

The show runs from Mar. 21 through Apr. 6 every day from 10 a.m. to noon and 1:30 to 5 p.m. The Okinawa World and Gyokusendo Cave are located at 336 Maekawa Tamagusuku, Nanjo City. Their homepage is at  http://www.gyokusendo.co.jp (Japanese only)