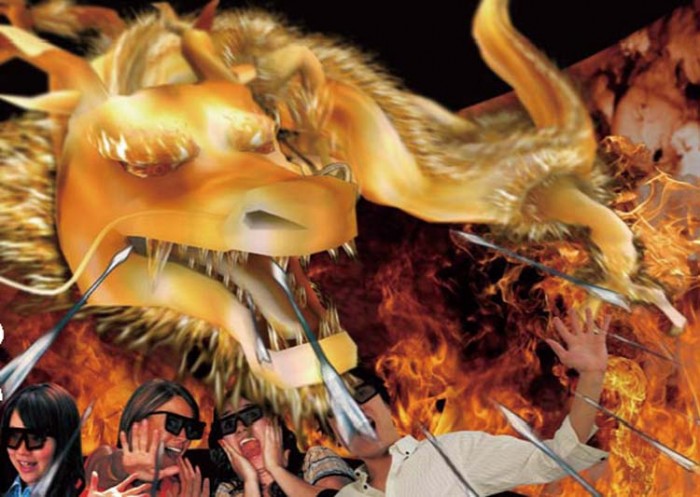 Most people are by now familiar with 3D movies and even TVs, but the next wonder some movie technology developers are tinkering with added physical effects that take place in the movie theater synchronized with the film. These effects may include rain, wind, vibration and movements on the seats. These kinds of movies are often called 4D films although they are not actually four-dimensional in the geometric sense.

These kind of physical effects are expensive to install, so they are mostly presented in custom-built theaters at special small venues such as theme and amusement parks. Currently one such venue is in Tomiton Shopping Center in Tomigusuku where 4D movies are shown through May 11 on a 360-degree screen that puts the viewer in the middle of a 3D visual environment. A powerful surround sound system provides sound, and other special effects include wind, mist and smell. The seats have a hydraulic system that moves them as dictated by the movie.

The show in Tomiton demonstrates all the special effects like the impact of actors falling on the screen, water falling, wind blowing, and bombs exploding among others.

Admission to the 4D movie is ¥700 for high school students and older, and ¥500 to children from 5 years of age through junior high school. Tomiton has free parking, and the location is at http://goo.gl/maps/4OALn