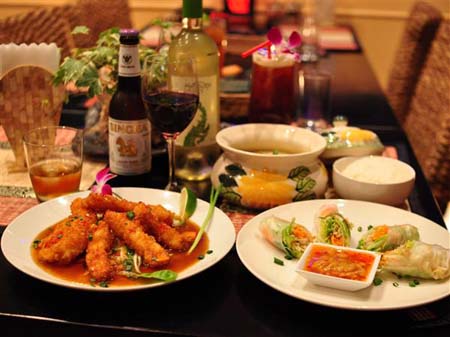 Thai curry, prawns, and spring rolls are among the more than 20 selections on the menu togther with Singha beer and Mekong whisky.

American entrepreneur Grant Hutter took a vacation from Okinawa to Thailand, fell in love, and has brought his lust for the flavorful Thai cuisine back to Naha.

The Thai Bistro located in Naha’s Kumoji district is Hutter’s handiwork, pulled together in a venture with an ex-Navy Hospital Corpsman, Nicholas Centala.

Hutter, who operates several bars and a hostel in the downtown area, is partners with Centala in the Thai Bistro, with “Nick putting the creative side together with my focus on the business side.”  They opened the 42-seat restaurant during the Christmas holidays. 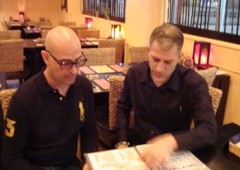 Thai cravings wouldn’t leave Hutter alone when he returned from a Pattaya vacation, so he went back, found Thai Chef Rungriya Maknimittanon, who calls herself Ann, and persuaded her to come north to Okinawa and cook for him.  With diplomatic issues and visas in order, the 45-year-old chef, who started in a restaurant environment at age eight with her mother near Bangkok, made the move to Okinawa.  She’s been cooking since age 15, and went to the United States for formal training, winding up spending 15 years on the U.S. east coast cooking Japanese, Thai and American foods. 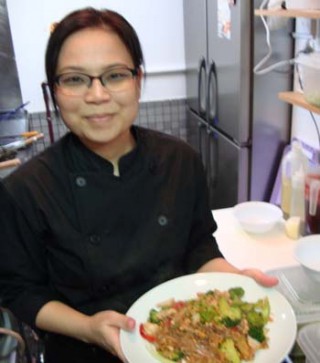 The Thai Bistro menu is simple but chock full of traditional tastes.  From the southeast Asian nation’s famous hot and spicy Tom Yum Kung, a shrimp soup with zesty galangal, lemongrass and mushrooms, to the well known green, yellow, brown and red curries, the foods set forth on the imported Thai furniture is “just like being there”.  Pad Thai and other noodle dishes are “1,000% authentic, and just what you get at any local restaurant in Thailand,” says Centala.  The Crab Rangoon appetizer is cooked to perfection, and on the back end, nothing can beat the sticky rice and mango.  There are, of course, other appetizer and dessert options bracketing the 20+ main meal selections.

The Thai experience extends to the Thailand’s national beer, Singha, and Mekong, the most popular of Thai whiskies.  An evening on the rattan and cushion chairs is a time visitors don’t want to end.  The Thai music wafting in the background presents an atmosphere of relaxation and tranquility.  Floor and table lighting, ceiling fans, and Asian lounge music give dinners a nice ambiance, a great new spot for couples, quiet celebrations, and groups alike to unwind and enjoy some really great food for a wallet-friendly price. 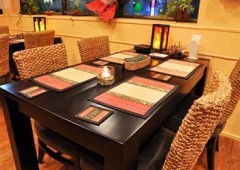 Tables and chairs are all imported from Thailand and very comfortable.

Thai Bistro prices are in the moderate/reasonable range, and is open daily except Mondays from 5 p.m.

Chef, Anne Maknimittanon says “We order only fresh vegetables, nothing frozen. We buy our meats locally, but we order nearly all of our sauces and spices directly from Thailand. Fresh herbs such as basil, lemongrass, coriander and mint are grown on-site so the flavors are as fresh as can be. It was a challenge to find some of the products and ingredients, but if we can’t give it an authentic taste, then it doesn’t go on the menu.” Vegetarian dishes are a great option and the menu offers an ample variety of mild to spicy treats.  The drink selection has fresh juices, Thai tea and hot floral teas.

To get there, go south to Naha on Hwy 58, and turn left at Kumoji Crossing towards Palette Kumoji, and again left just before Okinawa Bank Head Office building. Find a pay parking spot, and the Thai Bistro is on the third floor of a building that stands alone on the edge of a small park just one block north of the Kencho-mae monorail station.

Reservations aren’t necessary, but are certainly accepted by calling (098)988-4950, or visit them on the web at www.thaibistronaha.com.