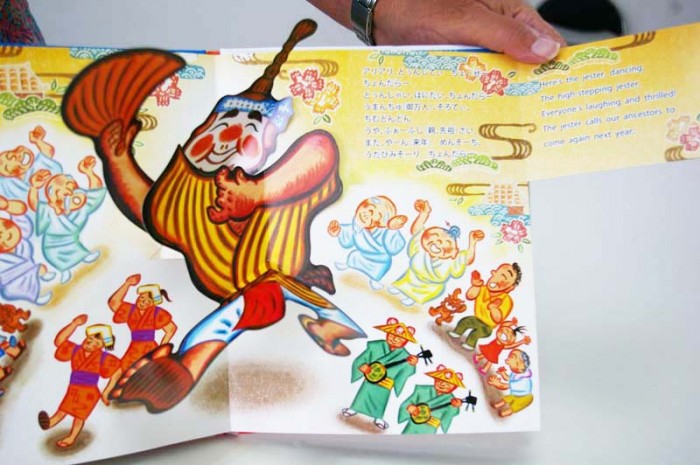 Eisa dancer jumps out of the book when the pages are opened.

Paper craft of various kinds are admired and valued forms of artistic traditions in Japan, the idea being  to make objects of paper or cardboard by cutting, folding and joining paper in a way that it forms easily recognizable  motifs.

Perhaps the best known art form of this kind is origami, originally a Japanese art of folding a piece of paper in often complicated forms from only one piece of paper without cutting or help of joints. These days origami has spread everywhere in the world and is practiced virtually in any place that has paper available.

For children, there are kits that are made of cardboard with printed pictures on them to help even small children to put together their own piece of art. They come in every size from a small to large, and usually take two to three days for smaller children to complete. Benefits for children who work on these cardboard models are said to be many. It helps them to make heir own private time and relax, feel a pleasing sense of fulfillment once the project is completed, and finally it teaches them to enjoy the beauty of craft paper.

Okinawan company GXE Communications has created a series of paper craft kits for children, for which it has won several awards since its establishment in 1997. It currently has several Okinawa-related items in production, including  Angama face masks of an aged couple, Shuri Castle, Shisa face, Ryukyu trading ship, Yambarukuina and birds and whales.

Company President Yoji Ganaha has also created a bi-lingual book aimed at very young children that parents can read to them and keep them entertained with the moving paper craft figurines that pop up from the pages as they are opened. A short Japanese and English text to read aloud to the child is on a flap attached at the upper corners of the pages in the book.

At the end of the book there is a short description of Eisa and it’s origins for parents to read. It is written by the Okinawa Department of Culture and Environment Cultural and International Affair Bureau Culture Promotion Division. Both the book, which sells for $25.00 and paper craft kits are currently for sale at Kadena and Foster Mail Centers in the Concession Malls, and at Okinawa Market on Chuo Park Avenue in Okinawa City.  For more info, call (098)929-2330.