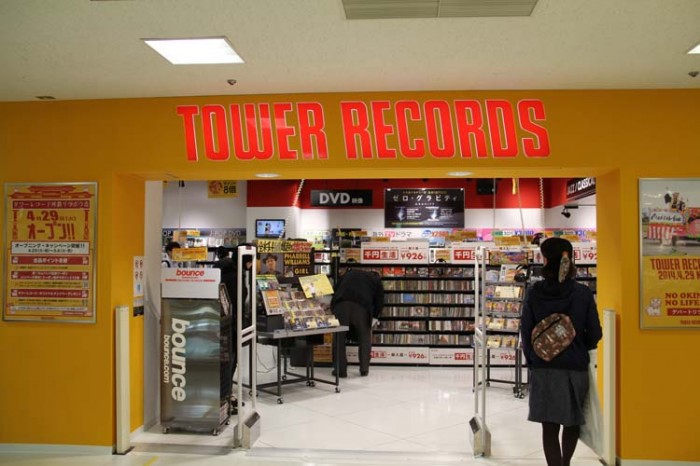 Tower Records has now a new Okinawa home on the 7th floor of Ryubo Department Store.

Music giant Tower Records is opening a new store on the 7th floor of Ryubo Department Store in Palette Kumoji to replace the outlet on Kokusai Street that closed last year, and the celebration includes a four-day entertainment special.

The events take place at the first floor event space at Ryubo Department Store, saluting Tower Records’ opening two days ago.  Admission is free for the entire four days of “No Okinawa, No Live”.  The new store is called Tower Records Naha Ryubo. A large variety of music genres will be for sale on the shelves, and company officials say that they plan to hold many events in collaboration with Ryubo. Tower Records was formerly located in the OPA Naha building on Kokusai Street, but OPA closed and the Tower Records also closed in July 2013.

The Beatles Exhibit displays things that once were actually used by the “Fabulous Four.”

Twin Cross opens the musical performances on Tuesday at 2:15 p.m., followed by Piranopaurusu and Pallyamarando at 3:15 p.m. and Akira Kawabatake at 4 p.m.

At the same time, Ryubo is also celebrating the 50th anniversary of the arrival of the Beatles to the U.S. with a special exhibition that runs through May 5th. The exhibition on the 6th floor has pictures, clothing and other belongings the members wore and used. There will also be authenticated Beatles goods on sale that have been gathered from all over the world.

The Beatles Exhibition is open daily from 10 a.m. to 8:30 p.m. The admission is ¥700 for adults and high school students and younger can enter for free.