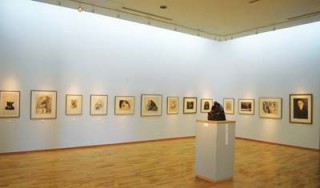 Exhibition of works by German artist Kathe Kollwitz that runs from Jun. 11 through Jul. 16, followed by works of Frenchman Georges Rouault from Jul. 16 through Sep. 14, give realistic glimpse to the lives of the working class people in Europe between the world wars.

A three-month art show “100 years since WWI Kathe Kollwitz and Georges Rouault Exhibition” opens next Tuesday at the Sakima Museum in Ginowan City.

Paintings by Kathe Kollwitz, a German painter, printmaker and sculptor who offered an eloquent and often searing account of the human condition and the tragedy of war, in the first half of the 20th century, are the focal point of the term June 11th through July 14th.  Her empathy for the less fortunate expressed most famously through the graphic means of drawing, etching lithography and woodcut, embraced the victims of poverty, hunger and war. Initially her work was grounded in Naturalism and later took in Expressionistic qualities.

In 1907, Rouault commenced a series of paintings dedicated to courts, clowns and prostitutes. These paintings are interpreted as moral and social criticism. He became attracted to Spiritualism and the dramatic existentialism of the philosopher Jacques Maritain, who remained a close friend for the rest of his life. After that, he dedicated himself to religious subjects. Human nature was always the focus of his interest.