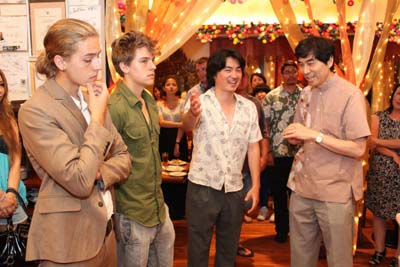 A 15-day U.S. – Japan Discovery Tour by the Koyamada International Foundation to motivate Japanese young people to study English and to travel abroad for schooling caps Aug. 20th with a public dinner on Okinawa.

Hollywood stars Shin Koyamada and the Sprouse Brothers are making their he last stop on the tour in Okinawa with the dinner at EM Wellness Resort Costa Vista Okinawa. Admission is ¥5,000 for the dinner, including autograph cards, entertainment, food and beverages and prizes included.  Doors open at 5:30 p.m. and the dinner begins at 6 p.m.

The tour’s purpose is to inspire and motivate Japanese youth to study English, to encourage them to study abroad at U.S. colleges and universities and to promote cross-cultural exchanges and strengthen friendship between the next generation of Japanese and Americans.  Shin Koyamada                              is a film actor, producer, philanthropist, entrepreneur and martial artist. He co-starred as “Nobutada” opposite Tom Cruise in the Warner Brothers action epic film The Last Samurai, with a worldwide box office of $456 million. Koyamada often volunteers and does philanthropic work for The Koyamada Foundation.

Traveling with the Foundation are Dylan and Cole Sprouse, twins from Arezzo, Italy, who are also actors, having begun careers at the tender age of six months.  In the mid-1990’s, the twins shared the role of Brett Butler’s youngest child, Patrick Kelly, on ABC’s series Grace Under Fire. They then moved on to what is probably their most memorable role as Julian in Adam Sandler’s box-office hit Big Daddy in 1999. More recently, the boys starred together in their own half hour sitcom The Suite Life of Zack and Cody on the Disney Channel.