Craft beers are worth drinking for the taste! 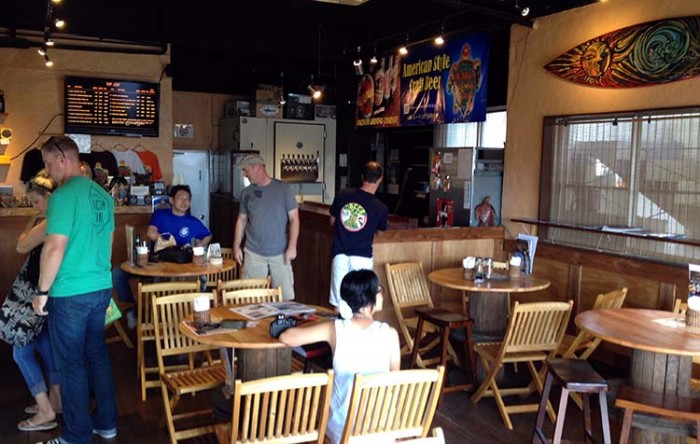 The Okinawa Brewing Company’s Beer Cafe in Yomitan is the first of three similar cafes that the company owners hope to eventually open on the island.

If you are in Okinawa and enjoy drinking beer, then this article is for you.  Thankfully, Japan is blessed with incredibly lenient public drinking laws that allow all to freely enjoy beers anywhere in public.

Slowly sipping a beer coupled with watching an incredible Okinawan sunset sounds like absolute bliss, doesn’t it?  Although, consider this.  Are you drinking beer or a third-class alcoholic beverage? 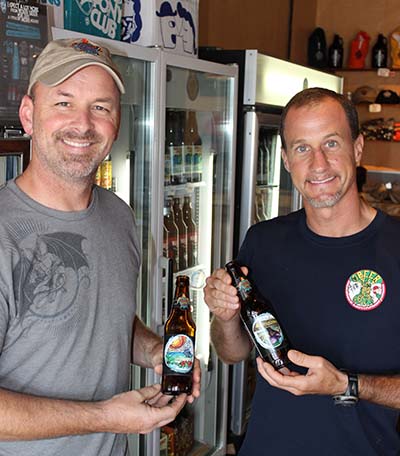 Men with a mission; Anthony (left) and Ray have decided to bring the taste of craft beers to Okinawan beer lovers.

In Japan, beer is taxed on its malt content.  Unfortunately, about 85% of beers in Japan fall into the category of third-class low-malt content alcoholic beverages. This means that most of what you see on the shelf isn’t really beer so much as it is carbonated water, a small amount of malt and flavoring with adjuncts such as rice or cane sugar to create alcohol, making for a subclass alcoholic beverage.

It’s not that difficult to tell the difference between third-class low-malt beer versus high quality beer at the supermarket because of the obvious difference – high quality beer is double the price.  If the price didn’t tip you off, if you pay attention to the taste you may also notice that the low-malt beer tastes very light.  If you are a beer connoisseur, prepare to be disappointed as your typical Japanese supermarket doesn’t really offer much selection are far as variety; it’s usually just a selection of ale.

If you get the brilliant idea to brew your own beer at home instead, I hate to break the bad news but in Japan, brewing any type of alcohol over 1% in your home is illegal.  Although this law is loosely enforced, because of it there are very few good suppliers of home brewing equipment and ingredients to make delicious home-brewed beer in Japan.

However, there is a glimmer of hope on the horizon in Okinawa for beer lovers – The Okinawa Brewing Company.  This “Beer Café” is located in front of Torii Station in Yomitan, and offers so many types of American Craft beers by the bottle and on tap that no one will leave unsatisfied. They are also waiting for their brewing license, which will allow them to be the very first “Craft“ brewery in Okinawa. 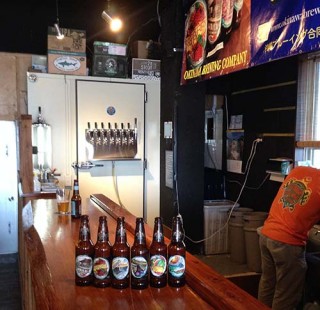 The Beer Cafe has more than 80 varieties of craft beers available on tap and bottles, and hopes eventually brew its own.

The owners, Anthony and Ray are excited about beer. Anthony says, ”Okinawa Brewing Company works hard to provide fresh U.S. craft beer to the Okinawan Islands, and we have usually more than 80 different beers in stock. Our brewers all started as home-brewers over many years, and while brewing any alcohol product more than 1% ABV is illegal in Japan without a license, we have invested a lot of time and money into making the brewing of U.S.-style craft beers a reality in Okinawa.

We plan to eventually open three Okinawa Brewing Cafe/Taprooms around the island and provide easy access to a large selection of U.S. craft beers, as well as our own locally brewed products once our licensing process is complete.“

Various other smaller craft brew pubs have opened in the Chatan area, but their enthusiasm for beer does not compare to what the Okinawa Brewing Company has as the beers they offer do not excite the palate like an Organic IPA on tap straight from the beer Gods of America.

The attempt at creating an Okinawan beer is not a new idea. Everyone knows that Orion is the official beer of Okinawa, however, unfortunately the Orion Brewing Company is no longer solely owned by Okinawans, as one of the largest shareholder of the company is Asahi, which is based in Tokyo, Japan.

Another smaller company that brews its beer in Nago is Helios. If you haven’t tried their Goya Beer then you are not missing much, but I challenge anyone to try it and tell me with a straight face that they think it’s delicious.

Nanto Shuzo is another one that brews a couple of varieties in their facility within Okinawa World theme park in Tama-gusuku.

Drinking beer on Okinawa is definitely one of my favorite pastimes. The weather and atmosphere on Okinawa creates one of the best beer-drinking environments in my opinion.  And although the quality and taste of most of the beer available in the supermarkets is, in my humble opinion, less than ideal, fear not!  The Okinawa Brewing Company is forging ahead and creating a new era of high-quality beer being sold on Okinawa.