Creativity is digital with teamLab exhibit at Ryubo 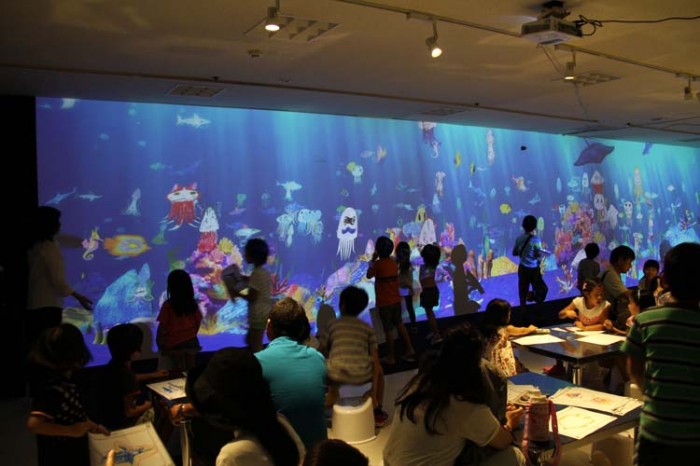 At Sketch Aquarium children draw sea creatures that are then transferred to a giant virtual aquarium where they are brought to life.

Technology is co-mingled with art, and the digital landscape is becoming a part of everyday life, making the inspirations of a Tokyo-based company, teamLab, challenges for everyone. 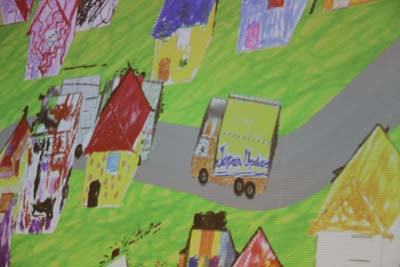 The Scetch Town is filled with objects drawn by children taking part in the play..

Japan’s teamLab is a commercial art success, creating dozens of inspirational projects for clients, including a 40-meter digital mural affixed to Tokyo’s 634-meter TOKYO SKYTREE.  The down-to-earth touches of teamLab are the measures that make technologies an interesting thing for both kids and adults to experience firsthand.  It’s an exciting realm of concepts, and they’re now on display at Ryubo Department Store in Naha City through August 31st.

The teamLab Future Park, as it’s being described, is open 10 a.m. ~ 8:30 p.m. each day through the end of the month on the department store’s sixth floor. Advance tickets are ¥1,000 for adults, and ¥700 for kids under 12.  Children under two years of age enter free.  At the door, adult tickets are ¥1,200 and kids’ tickets are ¥800.  Tickets are available at Okinawa FamilyMart Faniport e-plus, or at Ryubo Department Store. 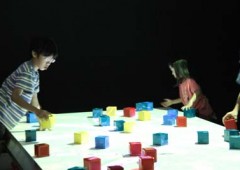 This teamLab Future Park is split into a half-dozen categories, offering activities that don’t even require language, conversations or introductions. Visitors simply delve into a topic and explore.  Kids easily become interested.  The theme of this exhibition is the “Learn and Play! teamLab Future Park.”  It’s already popular in Taiwan and Hong Kong, as well as on mainland Japan.

The Media Block Chair is one of the features, a “Co-Creative” opportunity to learn and play together.  teamLab calls it experience-based cognitive education space.  The blocks, or cubes, are joined by male or female connections to create walls, benches or furniture.  Digital information passes from block to block, and colors change the function of the space.  The Sketch Town is strictly a kids’ thing, with pictures drawn by children.  The pictures are entered to the town digitally and drawings come to life and move around, changing the landscapes.

Last year’s favorite at teamLab Future Park was Hopscotch for Geniuses, a hopscotch game using circles, triangles and squares to challenge players landing on the shapes projected on the floor.  As players land, color pictures and sounds are created.  Children use the opportunities to train both the mind and body as they learn to change the spaces instantly by figuring the links between shapes and colors.  A brand new exhibit this year is the Connecting Block Train, where cars and trains zip along roads and rail tracks.  By adding blocks, more cars and trains materialize, and the landscape changes.  As children learn the connections between colors, they place blocks in different modes to create a town.

The Sketch Aquarium was the other 2013 Future Park hit, where children create sea creatures that then are digitally brought to life. As creatures come alive as virtual images, they swim. As kids move closer, foods appear and the creatures gather around.  For the little ones, there’s ‘A Table where Little People Live’, and where objects move as they’re touched by tiny hands, changing colors and shapes as they’re manipulated.

teamLab is the brainchild of Toshiyuki Inoko, who quickly realized while an engineering student at the University of Tokyo that the future of technology was digital.  Even as the digital technology was evolving, Inoko had foresight to envision its use in art, and media and advertising.  From there, Inoko was on a roll.  Gathering bright young people around him to exchange ideas, Inoko created teamLab in early 2001.  His latest challenge has been creating interactive diorama animation using hundreds of smartphones.  The teamLab TOKYO SKYTREE project is one of the company’s most talked about, bringing together the traditional artistic styles of Japan with digital media techniques to design a perspective of Tokyo’s past and present as not seen before.

The 40-meter mural took teams of 16 artists and animators some two years to complete, designing a multi-layered work that began with photographs and were merged with handmade drawings.