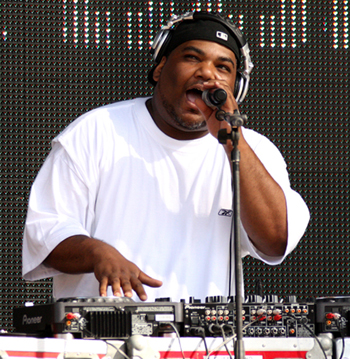 DJ Maseo brings a whiff of ’90s hiphop to Okinawan audiences at a special performance at the new Cafe & Bar Lounge The Brook, Sunday.

Okinawa is heading back in time to the days of cross-colored clothing, overalls and biker shorts, as DJ Maseo from 1990’s hip hop favorites De La Soul is coming to the Café & Bar Lounge The Brook.

DJ Maseo is currently touring to celebrate 25 years in the music industry, taking the local crowd Sunday on a special throwback DJ session designed to take everyone back to those good old days. He’s going to be playing all of the best and greatest hip hop and R&B hits of the 1990’s. Doors open Sunday at 4 p.m. and the show begins at 7 p.m. Advance tickets are on sale now for ¥2,500 at all Lawson locations, or by calling 090-1946-7593.  Tickets at the door are ¥3,000.

De La Soul is an American hip-hop trio comprising DJ Maseo and two MCs. Adhering to the new school style, the trio set new impactful trends in the world’s hip-hop music scene during the 1990’s and has produced a number of unique and innovative beats for the quarter century since its inception. Together with A Tribe Called Quest, Jungle Brothers and other legendary artists, De La Soul made a part of the Native Tongues — the collective of late 1980’s and early 1990’s hip-hop artists and groups, and contributed in the revolution in hip-hop music.

While the trio’s arrival in Japan for the Summer Sonic 2014, an annual rock festival held in mainland Japan, was much anticipated, DJ Maseo is looking forward to the performance in Okinawa! The host of DJ Maseo’s live performance is The Brook, a new nightspot in Chatan, which has already been drawing quite a crowd since its official opening last month. Located close to Kadena Air Base’s Gate 1 and close to the Miyagi shoreline, The Brook is fast becoming the town’s favorite lounge and dining bar for those who enjoy night entertainment in a sophisticated environment. DJ Harvey, a living legend in the world of house, disco and Balearic music, performed at the well-attended opening party.