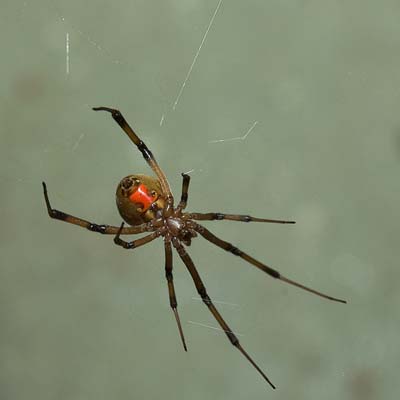 The telltale mark of a brown widow spider is the hour-glass shaped bright colored mark on its abdomen.

It was confirmed at six places. The female of the species is toxic but not aggressive. Its body length is about 1 cm, and its color is basically black, brown, gray or with spots by these colors.  A sure mark of a brown widow is its hour-grass shaped marking on the underside of abdomen in a vivid orange or yellowish color.

A bite by a brown widow causes pain and in some cases the victim feels tired and develops a headache, muscle ache and insomnia, which could continue several weeks. In spite of the neurotoxic venom of the brown widow being as strong as that of the better known black widow spider, its bites are usually not as dangerous as the effects of the toxin are usually confined to the bite area. The amount of venom they can deliver is also less than is the case wih a black widow.