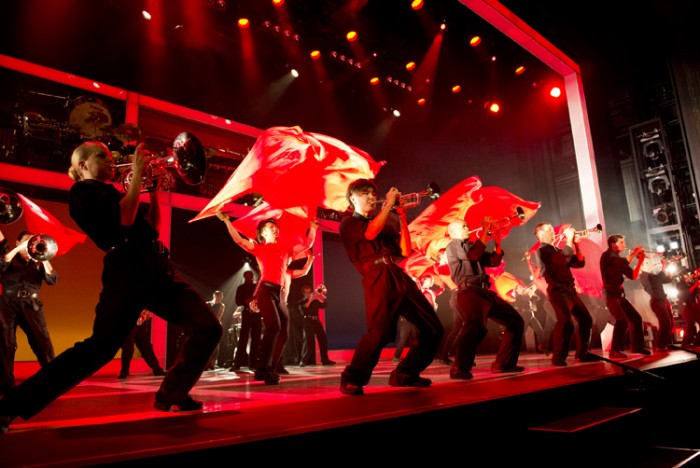 Blast is all about marching bands and drum corps, and the exciting stage that stimulates  senses of vision and hearing.  Blast won the Tony and Emmy awards in 2001, and came to Japan for the first time in 2003.  It was a huge hit. 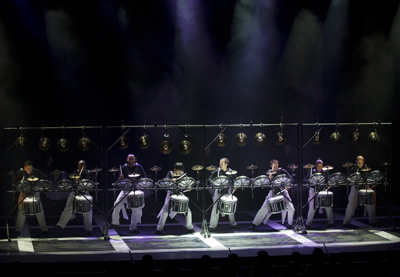 Percussion numbers play a big part of the show.

Performers play more than 12 brass instruments and 51 kinds of percussion instruments, and show unexpected prestigious renditions and performance.  Dancers intrigue the audience by so called ‘visual ensemble’ using a variety of 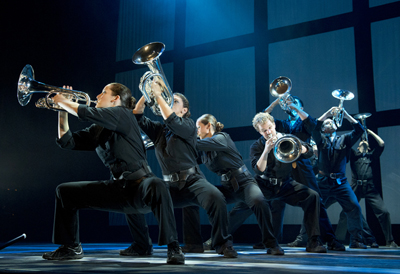 The musical action is virtually non-stop throughout the show.

tools like flags and sabers.  Their variety of music creates a dynamic entertaining stage combined by a huge stage set and brilliant lighting production.

From silence to motion, beautiful and perfect formations attract people in Bolero, written by Ravel.  Snare drums generate a fighting performance, malaguena of passionate rhythm… each scene with its own theme and color, stimulating peoples’ hearts.

Other than the main stage, there will be a special performance during the break time and ‘meet and greet’ with the cast.  Blast is a non-stop 120 minute-thrilling entertainment show!  Blast has played in all 47 Japanese prefectures.  Its last tour in 2012 was titled “I Vigor to Japan” in recognition of the Great East Japan Earthquake of March 2011.

Blast first was performed at the Apollo Hammersmith Theater in London in December 1999.  It made its way to Broadway in New York City in 2000, and then on to various cities in America during 2000 ~ 2005. Blast evolved from Star of Indiana, a drum corps performing at high levels of competition from 1985 ~ 1993.