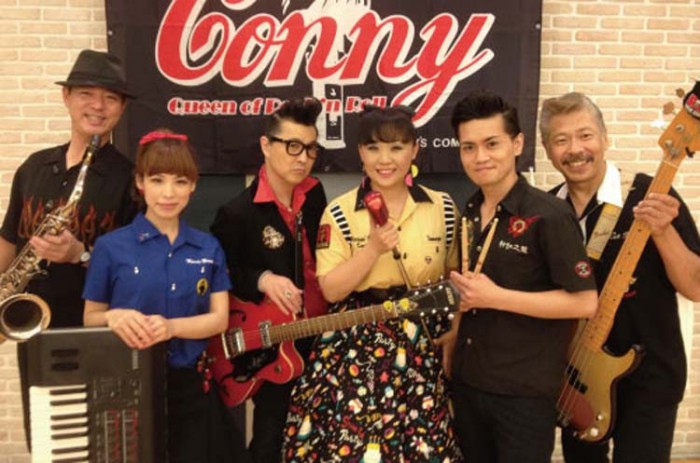 From Buddy Holly to Elvis to Jerry Lee Lewis, and even the Beatles, Okinawan people love listing to rock ‘n roll oldies but goodies, and this weekend one of Japan’s best known singer of the genre is performing in Okinawa.

On this three-day weekend honoring Respect for the Aged Day on Monday, an oldies pops band will perform free concerts at the San-A Gushikawa Main City on Saturday the 13th at 1:30 p.m. and 4:30 p.m. on the 1st floor main court, and at the San-A Nishihara City on Sunday the 14th at 1:30 p.m. and 4:30 p.m., also at the store’s 1st floor court.  San-A Gushikawa Main city in Uruma  http://goo.gl/maps/T6pWC and San-A Nishihara city http://goo.gl/maps/WTbIj

Conny is one of the most famous rock and oldies singers in Japan. She gives live performances all around Japan and did a show at “Viva Las Vegas Rockabilly Weekend” in Las Vegas in April. Conny is celebrating her 35th anniversary as a performer this year, and the live at San-A concerts are part of her festivities. Conny chose her stage name as Conny because she admired Connie Francis very much, and she will sing Connie’s songs like “Vacation”, Lipstick on your color” or “Where the boys are” on stage this weekend, along with more oldies songs. Her fans range from little kids to older persons, and you will have fun with Conny’s band at San-A. Conny’s official site http://www.conny.jp/index.html

She will also perform a 35th anniversary show at Birdland in Nago, Friday, starting at 8 p.m. Tickets are ¥3,000 in advance, or ¥3,500 at the door.  She’ll do yet another show on the 15th at Live House MODs in Mihama starting 7 p.m. This is a charity event for Okinawa Prefecture traffic orphans development charity. Ticket to the event cost ¥4,500 in advance, and ¥5,000 at door. Special guests at this event include Sho of Yokohama Ginbae fame and Hei Tiare Tahitian dance group.