You and I and The Big Blue is WE 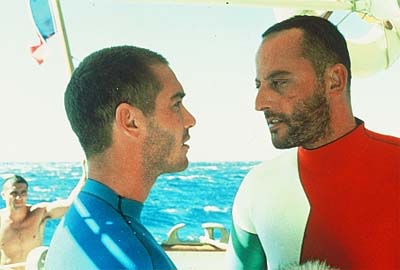 The Luc Besson film “Le Grand Bleu” about the free-diving pioneers was a huge success in Europe and especially France, it flopped in the U.S.  Jean-Marc Barr left as Jacques Mayol with Jean Reno as Enzo Molinari based on Maiorca. picture courtesy of 20th Century Fox Film Corporation

For anyone who uses the name of the Grand Blue, we do hope that your words, advertisements and marketing are backed up by actions that will help keep “Our Grand Blue Okinawa Ocean” for the future generations.  Cape Maeda is a classic APNEA/Free Diving competition and training location.

This Saturday’s International Coastal Cleanup (ICC) kicks off the 21st Ryukyu Cleanup Campaign at the Cape Maeda station passing out bags.  If you would like to participate, e-mail edo@okinawaocean.org and/or check with your local Scuba Locker. Freedom Buses will be chartered to Henoko for a massive rally while Okinawa delegates will be participating in the 69th United Nations General Assembly making an appeal to the UN for democratic processes to be respected concerning the planned bull-dozer policies of land-filling at Oura Bay in Henoko.  Need to keep the Blue!

The Luc Besson film “Le Grand Bleu” about the free-diving pioneers of the sport of APNEA, was first produced in 1988 and re-released in 1998 during the International Year of the Ocean catapulting to fame both Jean Reno who played Enzo Maiorca ( Enzo Molinari in the film) and Jean-Marc Barr playing Jacques Mayol with Rosanna Arquette in the role of Mayol’s girlfriend, Johana Baker.

The short version released in the US was commercially like a fish out of water and flopped. In France, it is considered one of the top grossing films of the ’80s.  According to Wikipedia: “Upon the death of Jacques Mayol, President of France Jacques Chirac referred to the film describing Mayol as having been an enduring symbol of the “Big Blue” generation.

Enzo Maiorca who is Sicilian, was not happy with the film, and via the courts prevented the movie from being shown in Italy until 2002 as reported by the BBC World Edition in September of that same year.  Italian friends on island agree that Jean Reno’s portrayal of Enzo Molinari is a caricature, which is offensive to many.  In Maiorca’s recent interview with DIVER by Ivo Scepanovic, he said he liked the movie but was not happy with how Luc Besson portrayed his character as an un-educated Mafioso.  He approved a shorter version of the movie.  This is a recent and worthwhile interview:

I am sad to say that Carlo Varini, the Swiss cinematographer who shot the Grand Bleu, passed away earlier this year.  He visited Okinawa in 2012 for the Kijimuna Festa visiting production of “Nokto – lullaby for babies and mothers” where he was the lighting director. He was back looking into other film projects.

According to the CineEuropa story by Muriel del Don, Varini was killed in a fire on the night of 17-18 May.  He had visited Cape Maeda just before his return.

Our prayers go to his family and friends in Switzerland and Okinawa. 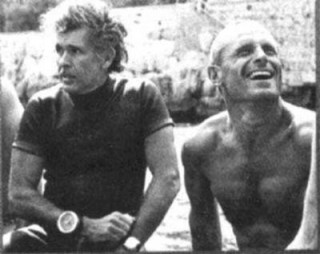 The real Jacques Mayol, left, with Enzo Maiorca during a competition. (la repubblica.it)

Jacques Mayol visited Okinawa in 1998.  He did his last dive in Okinawa before he died in 2001.  He was fascinated by the underwater formations of Yonaguni.  He was also interested in the Guanche people and legends about Atlantis in the Canary Islands where I grew up.  We met and he borrowed a book I had about Canary Islands. An old friend from Cape Maeda and co-founder of the Okinawa International Clean Beach Club/ Okinawa O.C.E.A.N. dove with him on that last plunge in Yonaguni.  You can read about that adventure at http://www.divernetxtra.com/profs/okinawa799.htm

While they were in the water, we flew in by light plane to present the local school with the UNESCO flag for the International Year of the Ocean (IYO).  We collected over 10,000 signatures using the “My Ocean Charter” with an approved Okinawa version using woodblock print provided to us by local artist Naka Bokunen.

There is an underwater monument for Mayol at the famous Yonaguni site.

We call on all ocean lovers in and out of Okinawa to join us from this coming Saturday to help clean a beach, donate or make a stance to save “Our Okinawa Ocean” for the future and to remember the rights of all living things. “Thanks to all the volunteers who are working hard to Save Our Seas as we need a Sea Change in policy towards Blue Peace!  Follow the money and hope for that Okinawa does not become a “Nuclear” way station nor a depository for contaminated land-fill rubble. Mutual respect, security and sanity. “The Butler” is a great movie! Next week: You and I are WE, who’s out…?