There are numerous holidays and ‘special days’ on the Okinawa calendar, but few evoke a more fervent interest than today’s Okinawa Soba Day, during which tens of thousands of bowls of Okinawan Soba will be sipped, chopstick’ed and slurped across the island. 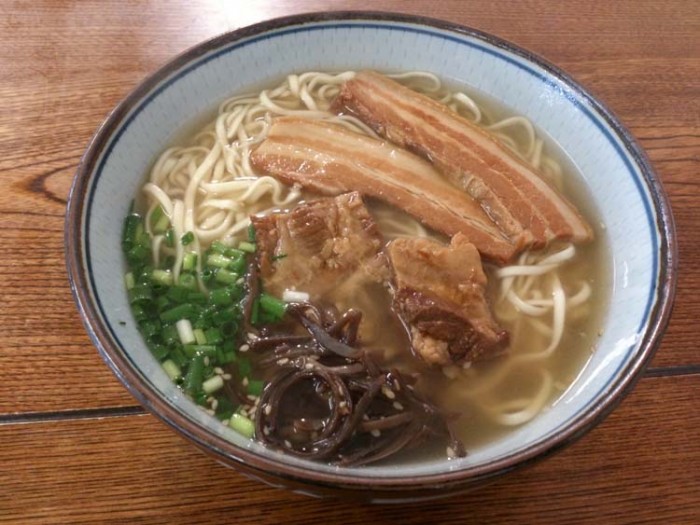 Okinawa Soba is unlike any other noodle in Japan.

A bowl of soba is to an Okinawan what a hamburger is to an American: Everyday fast food. If you’re new to the island, that may seem odd. If you’ve been here a while, chances are that you’ve experienced firsthand a bowl of Okinawa’s favorite food.  If you’ve been here for any length of time and have not had at least a bowl or two, then you’re behind the power curve and there’s no better day to rectify that than tomorrow. 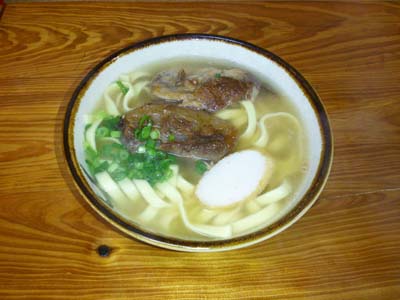 Okinawa soba has three types of noodles; the round curly are most common, but in the northern parts of the island the noodles are flat, and the third type is thin noodles favored on Yeyama and Miyako islands.

It’s been an official day ever since 1978, when the Japanese Fair Trade Commission decided to admit that the noodles everyone in this prefecture eats on a practically daily basis can be called “Okinawa soba.”  Okinawans call “Okinawa soba” as “soba” but in mainland Japan, you cannot get or find Okinawa soba as easily as in Okinawa because “soba” has a different meaning.

Why? There is a big difference, and a reason that is easy to understand. Soba in mainland Japan is made with soba buckwheat flour called “Sobako”, but Okinawa soba does not include any buckwheat and is made of flour. Actually, that’s why Okinawa soba is a not kind of a soba under the technical definition.

The thick wheat noodles resemble udon, while the soup is more similar to that of ramen. The noodles tend to have a circular cross section in the Yaeyama Islands, and tend to be slightly flat in the rest of the Okinawan archipelago. It is served in a broth flavored with konbu, an edible seaweed, and katsuobushi flakes and pork. Standard toppings are kamaboko fish cake, chopped scallions and a thick slice of stewed san-mai niku pork belly or pork ribs, and usually garnished with pickled ginger.

The origin of Okinawa soba dates to the Meiji era in Japan, when a Chinese cook was invited to Okinawa by a mainland Japanese man. He opened “Shina soba” restaurant around Naha. As time went on, the dish he served developed to become Okinawan soba. In reality, Okinawa’s soba is more like ramen in Japan than soba in Japan.

Following the reversion of Okinawa to mainland Japan, the organization governing fair trade claims stirred things up because according to their rules Okinawa soba could not be sold as soba because it didn’t use soba buckwheat. The trade people noted soba is defined to include at least 30% buckwheat. Nonetheless, Okinawa has been calling its noodles Okinawa soba, and there were many voices crying out to protect it as soba.

After lengthy negotiations, the Japanese government finally agreed to call or write it “Okinawa soba” as a special name, and not only soba. And then the day came that Okinawa soba was finally, officially endorsed.

Today, the Okinawa Soba Day, more than 2,000 restaurants put Okinawa soba on their own menu for this special celebration, and estimates are that 150,000 or 200,000 portions of soba are eaten each day. Almost all tourists to Okinawa try Okinawa soba. It’s one of most popular foods in Okinawa, and almost everyone who lives here has his or her favorite soba joint.

Okinawa Soba won an award at “The Original Genuine Food of Japan” contest last year, sponsored by the Japan Food Industry Association. This marked the first time that any food in the noodle category was chosen for this award in Japan. After winning, the Okinawa Fresh Noodle Association decided to authorize its member companies to label their fresh noodle packages with a sticker indicating winning the award and to indicate that the product is certified to be up to the standards of the association.

There are countless soba restaurants in Okinawa, but none with quite the reputation as Kishimoto Soba, a tiny shack of a restaurant in Motobu that attracts customers in droves. What makes this little restaurant’s soba better than anyone else’s? The “secret ingredient” that’s really not so secret to Okinawans in the know, is tree ash. Hard to believe, but a bit of wood burned to ash, and then ashes soaked to extract a special water, becomes the magic ingredient. Worth the drive to Motobu? Without a doubt. Be forewarned though; you’ll encounter a wait, as the place is always busy. And on top of that, your choices are really simple: order a ‘big bowl’ or a ‘small bowl’ of soba. It’s traditional, and it’s delicious.

As we’ve noted, there are literally thousands of opportunities to experience Okinawa soba. We offer one region –and remember, this is but one of hundreds—that combines getting out and experiencing a bit of Okinawa, while taste-testing at least a couple different Okinawa soba tastes.

Izumi-kaido, Route 84, is a mountain road meandering through the Motobu Peninsula from Biimata in Nago, where Route 84 and Route 58 intersect, to the Motobu fishing port in the west. Locals call it “soba-kaido.” More than 60 soba shops can be found along the road during a short 20-minute drive. The area is dotted with various sightseeing spots, and these soba shops are perfect for a quick and economical lunch while touring around the island.