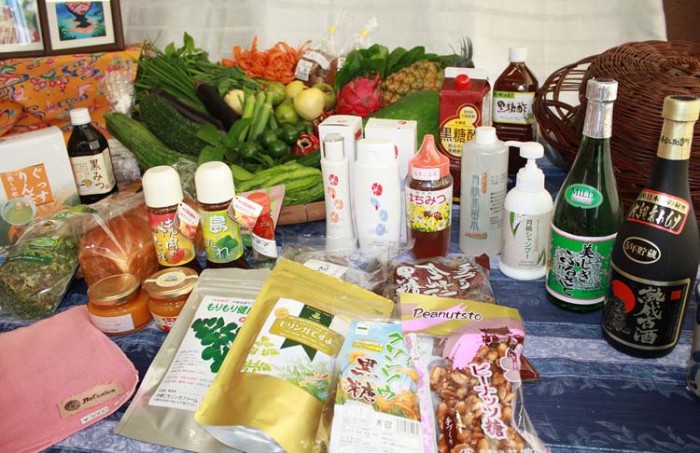 Agricultural produce, honey, awamori, cosmetics made of all natural local ingredients, and much more are on display and sale at the weekend’s Nakijin Fair in Naha.

A quaint northwest Okinawa village with a castle that served as the anchor point of the Hokuzan Kingdom, is being recognized beginning tomorrow in Naha for its tourism, products and traditional performing arts.

Nakijin is one of Okinawa’s top producers of high quality watermelons.

The Nakijin Fair takes place at the Okinawa Times Building, 1st ~ 3rd floors, 2-2-2 Kumoji in Naha City.  Some events are free, while others require an admission fee.  All promote Nakijin Village, which is filled with both historic sites and nature. Early in the 14th century, the Ryukyu Kingdom was divided into three parts, with the Hokuzan Kingdom dominating the northern part of the island, including Nakijin Castle, which has been declared a UNESCO World Heritage Site. Another landmark is the Kouri Bridge, a new popular site connecting Yagaji and Kouri islands with its beautiful natural beaches.

Nakijin tourism, products and traditional performing arts come together Friday.  People can enjoy the exhibition and sales of Nakijin regional goodies, traditional dyed products and a display of panel pictures.   The fair will take place through Sunday. A movie filmed in Nakijin will be played for free at the hall on the third floor on Friday beginning at 1 p.m.

For people interested in traditional performing arts, there is a Bojutsu performance, which is a martial art that utilizes a long stick as a weapon of choice, and, of course, youth Eisa performance is also on the program.  A group of junior and high school students will play Okinawa’s traditional opera and dance, Kumiodori in a modern version.