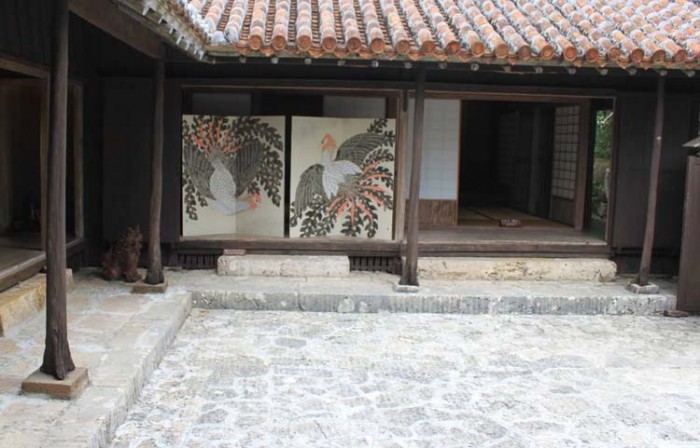 The Ichiro Kikuta Byobu Exhibition is at the Nakamura House this weekend, providing aspiring artists a chance to see one of the island’s most famous ink-wash paintings expert’s best works.

Ichiro Kikuta is living in Onna Village and drawing ink-wash painting on Japanese paper.  Kikuta has recently hosted exhibitions at Ryubo and at the Okinawa Institute of Science and Technology. The exhibition at Nakamura House, 106 Oogusuku, Kitanakagusuku Village, runs Saturday and Sunday 9 a.m. ~ 5:30 p.m.  Admission is ¥500.

This time his featured works include a folding screen, Byobu in Japanese. The exhibition s designated as a national important cultural property.  Kikuta will bring some Byobu including his new work of phoenix.  These, he notes, would make a nice accompaniment to a traditional vintage house.

He draws on Japanese authentic folding screen, which is hand-made Japanese paper by many layers. He draws various kinds of wild animals of northern Okinawa, using ‘Yanbaru’ by Sumi ink. The exhibition showcases black-ink paintings, including works featuring yambaru kuina or Okinawa rail, elephant ear plants, and pink-flowered hibiscus. Some of his sketches are also on display.

The artist was born and raised in a small village nestled in the mountains of Fukushima, in northern Japan. From the time of his childhood, he always enjoyed drawing what he found in nature around him, such as insects and birds. Gradually, Kikuta became more inclined to project the real substance of nature, rather than superficial aspects of it. Having realized that flowers, birds, and mountains are all just parts of the entirety of nature, always changing from one moment to the next, he ultimately settled on black ink as his medium of choice to depict the “wholeness” of the natural world.  “I’m aiming to convey my view of nature by the artwork to people,” Kikuta has said.

Kikuta began his art career patterning his studies and style on the Yamato ink wash painting style which Sotatsu Tawaraya perfected in the early stages of Edo.  Kikuta opened his own studio in Ada, Kunigami Village, in 2006.  Much of his style surrounds the meditation concepts, which both East and West drew upon through the ages to understand meditative states, including yoga and zen.  His perspective of meditation was to bring visualization of meditation.  Once the Industrial Revolution hit, the modeling principle became a major method of gaining artistic focus.  His drawings in India Ink and the folding screens are most popular.