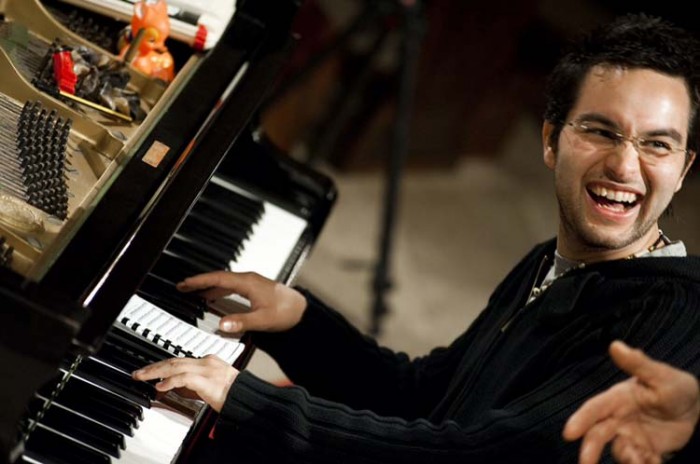 An Italian jazz pianist is bringing his Japan Tour to Garaman Hall in Ginoza, Sunday afternoon.

Livio Minafra, who has a very unique style of playing a piano that he calls ‘prepared piano,’ performs at 3 p.m. Sunday at Garaman Hall.  Doors open at 2 p.m. Advance tickets are available until midnight Saturday for ¥2,500.  Tickets at the door are ¥3,000.  Tickets are required for junior high school age students and older.  Elementary school students are admitted free.  Children pre-school age and younger cannot be in the concert hall, but day care service is available for children one year of age and older, for ¥1,000 per child. Reservations are available at (098) 983-2613.

Minafra’s ‘prepared piano’ is a piano that has its sound altered by placing objects inside the piano like dolls or a ball… or it could be anything.   Minafra is from southern Italy, and grew up in a musical family with his composer, pianist and jazz trumpeter father.  He joined his father’s group ‘Pino Minafra Sud Ensemble’ and started his career as a jazz musician in 2001. He has been awarded the ‘Top Jazz’ in Italy’ prize three times in 2005, 2011 and 2011.

Now, he is not only a solo pianist but has formed his own quartet, and performed in concerts on the five continents.  He has released three albums, ‘Ladolcezza del Grido’ from Leo Records of UK, ‘La fiamma e il cristallo’ and ‘Surprise!!!’ from Enja Records of Germany.  Livio has collaborated with big names like Bobby McFerrin, Jerry Gonzalez, Frank London and Paul Rutherford.