Amidst the waning election hype and celebrations for the new Governor of Okinawa, Takeshi Onaga and new Mayor (first female) of Naha City Mikiko Shiroma, last week’s UNESCO World Conference on ESD is sorting out the declarations and commitments made towards a sustainable future.

Okinawa has the potential to become an Asia-Pacific HUB. The UNESCO conference was huge and needs digesting. It does connect to some things in Okinawa. With the new governor, I trust that there will be some modifications in the education equation in Okinawa if the leaders act in a timely manner. Of course, besides the Henoko/Futenma issues, all other things might remain as they are, too.

I would like to share with JU readers the official release ending the conference. A commitment was submitted for Okinawa. Next week’s issue will feature its main points and possibilities. 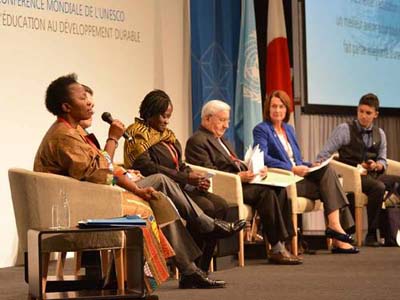 World Conference on Education for Sustainable Development calls for renewed commitment by all countries. ©All rights reserved

“We were able to share successful initiatives from all over the world, to help government representatives and other key stakeholders formulate new goals and objectives.  We have shaped these into a Roadmap for ESD that will implement the Global Action Programme,” said Mr Qian Tang, Assistant Director-General for Education of UNESCO.

More than 1,000 participants gathered for the three-day conference under the theme “Learning Today for a Sustainable Future.”  Among them were 76 ministerial-level representatives of UNESCO Member States, NGOs, academia, the private sector and UN agencies, as well as individual experts and youth participants from 150 countries.

“I express my sincere gratitude to the Government of Japan for hosting the UNESCO World Conference on ESD,” added Mr Tang.

The GAP is a follow up to the UN Decade of ESD, which is ending this year.  It will generate and scale up ESD actions in each of five priority areas; 1) Policy support; 2) Whole –institution approaches; 3) Educators; 4) Youth; and 5) Local communities. UNESCO has called on stakeholders to make specific contributions to launch the GAP.  Stakeholders from 80 countries have responded with 363 commitments.

The Aichi-Nagoya Declaration was adopted unanimously at the Closing Plenary. It builds on the achievements of the Decade and the deliberations of the Conference and the Stakeholder Meetings which were held last week in Okayama. The Declaration also ensures that the outcomes of the Conference will be taken into account at the World Education Forum 2015 to be held in Incheon, Republic of Korea.

The Conference on ESD in Aichi-Nagoya was co-organized by UNESCO and the Government of Japan. Representing the host country, Japan’s State Minister of Education, Culture, Sports, Science and Technology, Hideki Niwa said “ESD will not end with the last year of the Decade of ESD. Instead let us recharge our efforts for ESD with even greater commitment, making the most of the experiences we have gained so far.”