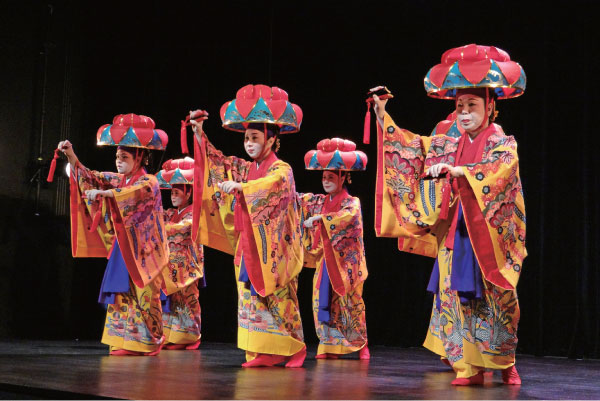 Ryukyu dance and music once played at the royal court of the Ryukyu Kingdom fills OIST auditorium on Nov. 16th.

Ryukyu Traditional Performing Arts go on stage Nov. 16th to promote Okinawa’s music and culture at the Okinawa Institute of Science and Technology.

The program, the 13th in a series sponsored by Okinawa’s premier graduate university, draws attention to Okinawa, which was once the land of the Ryukyu Kingdom, an independent nation with a 450-year history. In that era,Ryukyuan music was widely promoted and carefully protected by the kingdom. In recent years the Nomura School of Ryukyu Classical Music Preservation Association was established to properly preserve and disseminate traditional Ryukyuan music, and its members have been performing actively in and outside of Okinawa.

The November 16th concert takes place in the OIST Auditorium beginning at 2 p.m., with doors opening at 1:30 p.m.  Registration is required, although admission is free. Reservations can be made at https://www.oist.jp/concert.

This event will introduce Kumi-Odori, a typical form of traditional Ryukyuan dance, which will be performed mainly by young musicians. It accents the world of traditional Ryukyuan performing art, one element of Japan’s rich cultural heritage.  Ryukyu Traditional Music is a general term for various forms of Ryukyuan court music used in Kumiodori and traditional dances. In addition to Sanshin, an Okinawan three-stringed instrument, Ryukyu traditional music employs a number of other instruments, including koto, flute, Chinese fiddle, and drums. It is characterized by its solemn and dignified sound.

Kumiodori was founded by Chokun Tamagusuku, the odori-bugyo, or dance magistrate, of the Ryukyu Kingdom. It is a form of stage drama consisting of three elements: script, music and song, and dance. In 1972, as a testimony to the uniqueness of this art form, kumiodori was designated as an important intangible cultural asset and registered as a UNESCO intangible cultural heritage in 2010.

Ryukyu Dance is one of the Ryukyuan traditional performing arts and a general term for dance forms presently being practiced and handed down to future generations in Okinawa. Ryukyu-Buyo usually includes several musical numbers embracing various styles of Ryukyuan traditional music. While originally performed only by male dancers, many female dancers have emerged since the Meiji Era, especially in the postwar period. Ryukyu-Buyo can be broadly classified into koten-odori (traditional dance), zatsu-odori (common dance), and sosaku-buyo (creative dance).

Also on the program is an introduction to Okinawan folk songs that originated from traditional music and gradually became popular. There have been many colorful songs that convey excellent narratives. Diverse folk performing arts have been carefully passed down from generation to generation since ancient times in different parts of Okinawa. Typical forms include Eisa Dance, Shishimai (lion dance), Bo-Odori (stick dance), Drama, and Buyo (Dance), which are performed at various events around the prefecture.

Okinawa Plays have been loved and appreciated by people of many generations. It is divided into two main types. One is Kageki (Opera) that combines scripts suitable for Okinawan folk songs and classical music and dance. The other is “Dialect-spoken Play,” in which the Ryukyu dialects are spoken.