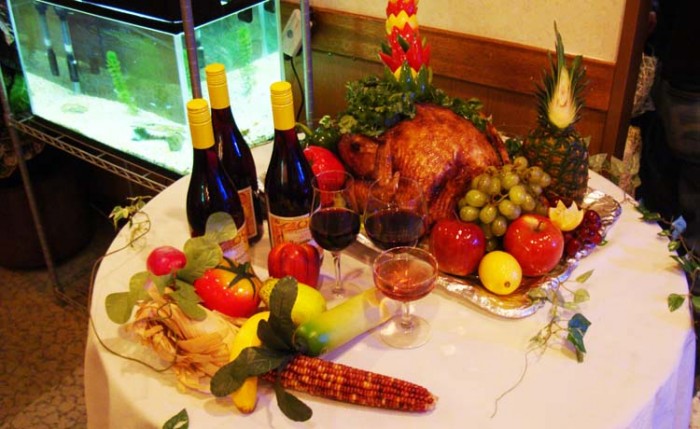 Thanksgiving would be nothing without turkey and all the traditional trappings.

The Detroit Lions have less to worry about this Thanksgiving Day than ol’ tom turkey does.

The tradition of granting a presidential pardon to the turkey sent to the White House continued this week, but the winless Lions aren’t so worried about their fate this holiday as they face the 5-5 Buffalo Bills on the National Football League gridiron.  Detroit knows Buffalo will be fired up, but figure their 7-4 record should take precedence. Of course, due to the time zones, that Thanksgiving Day football comes to Okinawa in the wee hours of Friday, the training holiday here.

The second Friday morning NFL action pits the Dallas Cowboys and their 8-3 record against the opposite 3-8 record New York Giants.  Sports aficionados will have to turn to basketball to get their ‘fix’ on turkey day on AFN.

Apart from giving thanks for bountiful blessings over the year, Thanksgiving is a day for eating.  The Seamen’s Club Naha is one of many base restaurants touting a Thanksgiving Feast on Thanksgiving Day.  It runs 11 a.m. ~ 9 p.m., and features the traditional turkey with all the trimmings, ham with the fixin’s, salads, soup and sweet cornbread, not to mention an array of desserts.  The all-you-can-eat buffet is $20.95 for adults and $11.95 for kids 5-12.  Children four and under eat free.  Reservations are recommended, particularly for larger groups, by calling (098) 857-1753 or DSN 648-7493.

An estimated 297 million turkeys became holiday dinner in America last year, top billing on dining room tables during American-style festivities that pay homage to the first settlers in North America, the pilgrims in the early 1600’s.  After pilgrims fled their native England in 1609 to escape religious prosecution, they traveled to Holland before migrating to the New World.  In exchange for the boat ride, those adventurous Englishmen and their families agreed to work for financial backers seven years in what is now the United States.

Their first fall in the new land brought a bountiful harvest, with enough corn, fruits and vegetables to store for the winter.  The pilgrims celebrated with their Indian neighbors in what is now traditionally called the first thanksgiving.  Squanto and 90 Indian braves joined in a three-day celebration of games, races and skills demonstrations with their bows and arrows, and the pilgrims’ muskets.

Harvest thanksgiving celebrations didn’t begin with the pilgrims, though, dating back thousands of years to festivities heralded by the ancient Greeks and Romans, the Chinese and the Egyptians.  Greeks worshipped many gods and goddesses, with their goddess of corn and grains at the forefront.  Across the Mediterranean, ancient Egyptians commemorated their harvest festival in the spring, honoring Min, the god of fertility and vegetation.  The Pharaoh joined the festivities, and farmers wept and pretended to be grief-stricken, an effort to mislead Min, who they thought would be angry at the corn harvests.  Jewish families, likewise, have been celebrating Sukkoth, a harvest festival, each autumn for more than 3,000 years.

Here in Asia, Chung Ch’ui, the Chinese harvest festival, is celebrated on the 15th day of the 8th month of the lunar year, in tribute to the moon.  The festival gives thanks for good fortunes with moon cakes, yellow and round, shaped like the moon.

Thanksgiving in America became an institution as early as the late 1600’s, but turkey found its place when President Abraham Lincoln made it a formal holiday in 1863.  By Lincoln’s orders, the feast was to extend to all Union soldiers fighting the Civil War, and turkeys were chosen over chickens because they were bigger and more cost-effective.