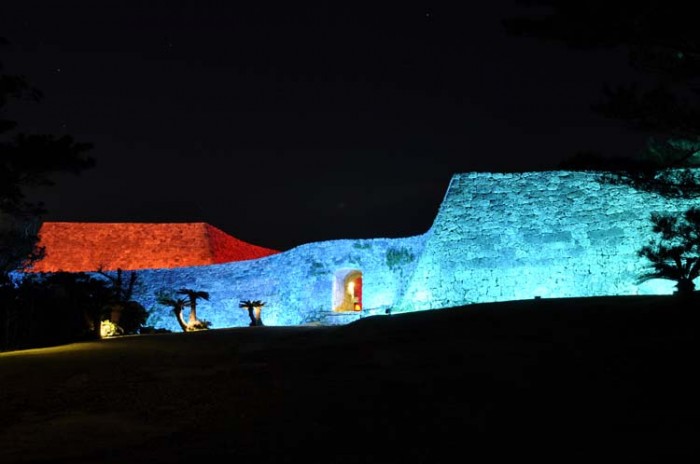 Besides being pretty Zakimi Castle Ruins offer exciting oppotunities to phoographers during its evening lighting through Jan. 29th.

Zakimi Castle was built by Gosamaru, a famous military commander more than five centuries ago.   Zakimi Castle is best known for its beauty of walls made of stone masonry. The arch stone gate is said to be the oldest stone gate in existence in Okinawa.   The curving castle walls and thick strong stone masonry are unique, making the castle illumination exalted and majestic.  The Zakimi Castle is the only one that anyone can come to anytime for a free look, unlike any other castles in Okinawa.

The Zakimi Castle Ruins illumination opened last weekend, and runs through January 29th 2015, from 6 p.m. ~ 9 p.m.  On Christmas Eve and New Year’s Eve the castle ruins lighting extends to midnight.  Admission is free, but will be cancelled on any evening when weather is adverse.

Zakimi Castle is located in the heart of Yomitan Village. The castle was lit up for the first time in celebration of Yomitan becoming the largest village in Japan on January 1, 2014, and the lights shine from 1800-2100 every day through Jan. 29, 2015. Built in the 1400’s, all that remains today are some of the stone walls.