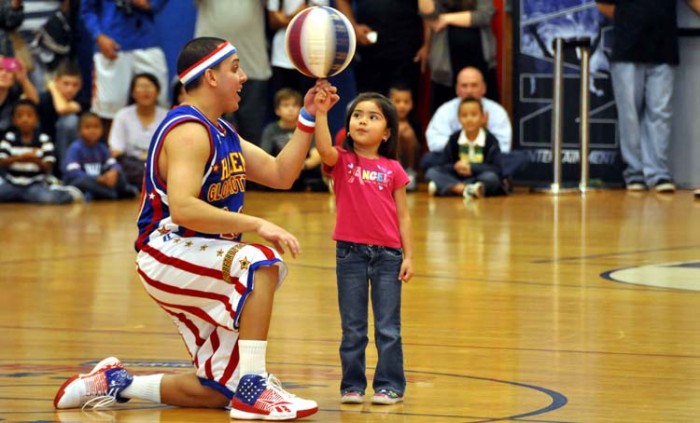 The Harlem Globetrotters are always ready to teach some basketball tricks to appreciative audience.

The world famous Harlem Globetrotters are bringing a slice of home to U.S. troops based overseas with an extended holiday tour of global U.S. military bases, and the ball bounces here –at the Camp Foster Field House and Risner Fitness Center on Kadena Air Base—on December 9th and 10th respectively.  This free performance begins at 6 p.m. at the Fieldhouse on Tuesday and 5:30 p.m. at Risner, sponsored by Navy Entertainment, MCCS & Armed Forces Entertainment.  Entry to both shows is on a first-come basis until the venue is full. 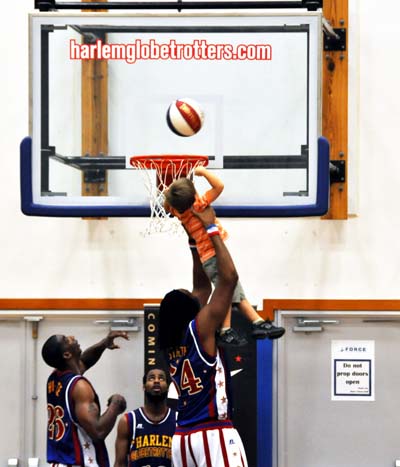 This is the 13th time in the past 11 years that the “Ambassadors of Goodwill”™ have entertained U.S. troops overseas. The 11-game tour, which began only days ago, will feature shows on U.S. military bases in Japan and Guam.

Highlights of previous military tours include the Globetrotters’ first-ever visit to Afghanistan in November 2012, tours of Iraq in 2009 and 2006, a visit to Guantanamo Bay, Cuba, in 2005 – and games on four active-duty U.S. aircraft carriers, including a performance on the U.S.S. Eisenhower in the Persian Gulf in 2006.

“Our military tours are one of the most rewarding experiences for any Harlem Globetrotter,” said Globetrotters star, Cheese Chisholm. “The troops are always so appreciative when we come, but we are extremely grateful as well, because we consider it an honor to entertain these brave men and women that put their lives on the line every day to protect our freedom.”

The Harlem Globetrotters Hometown Heroes program is designed to pay tribute to active, retired or wounded members of the military. The initiative was launched during a special exhibition game on Oct. 6, played on the flight deck of the famous Intrepid aircraft carrier in New York City.

Harlem Globetrotters Hometown Heroes will be honored during each of the 310-plus games on the team’s 2015 North American Tour, which runs from Dec. 26, 2014, through May 2015.

Throughout their history, the Original Harlem Globetrotters have showcased their iconic talents in 122 countries and territories on six continents, often breaking down cultural and societal barriers while providing fans with their first-ever basketball experience. Proud inductees of the Naismith Memorial Basketball Hall of Fame, the Globetrotters have entertained hundreds of millions of fans-among them popes, kings, queens, and presidents-over more than eight thrilling decades.