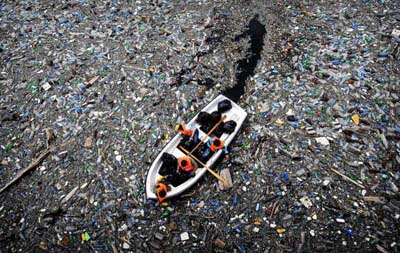 Trash piling up in the ocean is eventually going to be a problem affecting everyone.

Dear Japan Update readers.  We are blessed to be living in Okinawa, rated as one of the top ten diving spots in the world. As a fleet of Chinese “Red Coral Poaching Thug Boats” is invading Japan’s Ogasawara Islands, this petition reminds us that this problem is not so far away. Mission Blue, led by Dr. Sylvia Earle, is a global partnership initiative raising public awareness about the ocean, and inspiring people to help protect this vital natural resource. If you have never heard of Dr. Sylvia Earle, please listen to her TED Prize Talk “My Wish: Protect the Oceans,” and join us in protecting our ocean resources towards the World Ocean Renaissance by 2033.

Imagine a world with no laws. Without restrictions, profit-seeking businesses would plunder natural resources and pollute with impunity. It would be a world where the public good was sacrificed to private profit.

Did you know half of the planet exists in this state?

The High Seas—approximately 50 percent of the surface area of Earth—are beyond national jurisdiction and remain almost completely lawless. The result? Over-fishing, pollution, and unbridled resource extraction. Catastrophic loss of biomass and outright extinction. Great gyres of plastics that churn and churn. The tragedy of the commons.

During its current session, the United Nations General Assembly can make a decision regarding the scope, parameters, and feasibility of rules and regulations for the High Seas. Add your voice to the growing call for a global, comprehensive, conservation-minded legal framework for this precious half of our planet. We can’t afford to wait any longer.

We implore the United Nations General Assembly to follow through with negotiations for a High Seas Biodiversity Agreement, to which it has committed alongside the international community, through the outcome document from the U.N. Conference on Sustainable Development in June 2012.

As concerned global citizens, we strongly encourage the UNGA to follow through on these matters and implement responsible governance of the high seas. The ocean as a whole is rapidly losing biomass and biodiversity while being inundated with unprecedented levels of pollution and the harmful impacts of climate change. Our future and that of the ocean is one. We must find a way to live sustainably within the great systems that sustain us.

By developing an international regulatory instrument under the United Nations Convention on the Law of the Sea, the High Seas Biodiversity Implementing Agreement could be achieved at the January 2015 meeting of the UNGA’s Ad Hoc Open-Ended Informal Working Group to study issues relating to the conservation and sustainable use of marine biological diversity beyond areas of national jurisdiction.

We remind Your Excellencies that the parties have agreed to initiate the creation of policies to regulate the High Seas before the adjournment of the 69th session of the General Assembly in September 2015.

We urgently plead the United Nations General Assembly to implement a comprehensive High Seas Biodiversity Agreement for the sake of the planet and our future on it.