Ringing in New Year Okinawa style is all night affair

The festive lights of the holiday season are burning brightly, but for many, the eye is on next week’s big event, celebrating the New Year. 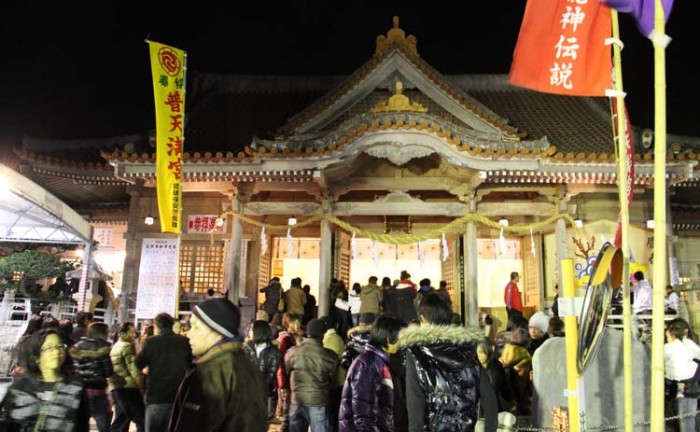 Futenma Shrine is one of the most popular destinations for people to visit during the New Year holidays.

New Year’s Eve is less than a week away with all the modern celebrations that go with New Year’s celebrations, including some that are uniquely Okinawan. Beyond next week, there is February 19th   when the Lunar New Year ushers in the Year of the Goat. The Chinese New Year is Tet Nguyen Dan in Vietnam, Korean New Year in South Korea, or Setsubun here in Japan. In Okinawa, the Chinese New Year is celebrated mostly in fishing ports and villages, including Itoman City. 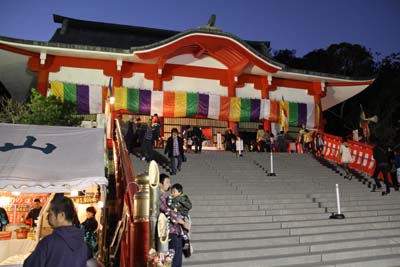 Another popular temple is Naritasan Fukusenji in Kitanakagusuku that is very popular during the new year but also know as a place to get your car blessed.

First, a look at the traditional New Year’s celebrations with customs and traditions from around the world being practiced here in Okinawa. New Year’s is the oldest of all holidays celebrated, first begun about 4,000 years go in ancient Babylon. Starting about 2,000 BC, the Babylonians celebrated their new year on March 23rd, an interesting choice since they had no written calendars. At any rate, Babylonians weren’t content with only a New Year’s Eve; they celebrated 11 days, with each having a special theme. The Roman Empire kept the March date for centuries, but the emperors’ constant tinkering with calendars finally led the Roman Senate, in 153 BC, to declare January 1st to be the official beginning of each year.

That baby we see wrapped in diapers and holding the New Year’s Banner? That’s a gift to America from the Germans, who used the image of a baby as the symbol of the New Year since the early 14th century. The tradition of using the baby itself began in Greece about 2,700 years ago as they honored, Dionysos, their god of wine, by parading a baby about. 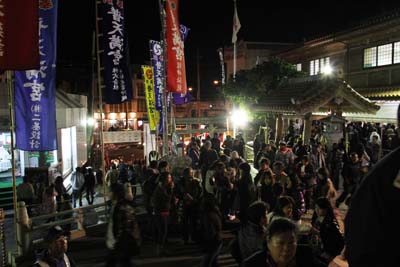 It gets crowded at Futenma Shrine as midnight approaches and the year changes.

Visits to the Shrines and Temples are a tradition in Okinawa. Naminoue Shrine will attract tens of thousands beginning New Year’s Eve, as will Futenma and Onoyama shrines. Shortly before midnight, listen for the sounds of bells ringing at temples and shrines. The Japanese tradition, Joya no Kane, the ringing of the bells 108 times, ushers in the new year while warding off evil spirits.

After bidding farewell to the year that has just ended, it’s time for many Japanese people to pay their first visit of the new year to a local shrine. Hatsumode is a traditional Japanese custom of visiting a shrine or temple at the beginning of the year. When performing hatsumode, one thanks the gods for the blessings received during the previous year, prays for another happy and prosperous year, writes wishes on a wooden plate called an ema and draws an omikuji (paper with a fortune). Lucky charms purchased in the previous year must be returned to the same shrine to be burned. Most shrines and temples are open through the night and filled with a great many worshippers during the first three days of the new year. 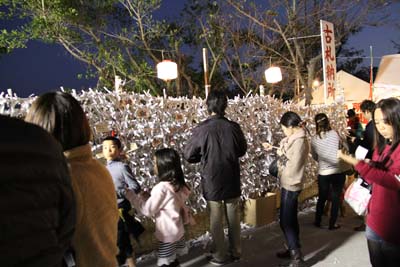 Tying “Omikuji” fortune telling piece of paper to a fence at the temple ensures that the prediction comes true.

Okinawa Gokoku Shrine, 沖縄県護国神社 is in Naha City in Onoyama Park. People go here for family safety, traffic safety, warding off evil spirits, recovery from illness, success and prosperity in business and realization of general wishes.  It is open around-the-clock December 31st through January 3rd, and from 8 a.m. ~ 6 p.m. from January 4th onward.  Visitors can park at Onoyama Athletic Park.

Naminoue-gu Shrine, 波上宮, is considered important for family safety, safe childbirth, prosperity in business, good health, warding off evil spirits, public well-being, good catch of fish and safe journey, and is at 1-25-11 Wakasa in Naha City.  It is open 24 hours from December 31st through January 3rd, and from 7 a.m. ~ 6 p.m. from January 4th.  Pay parking is available in the area.

Okino-gu Shrine, 沖宮, is at 44 Onoyama-cho in Naha City. It is open 24 hours from December 31st through January 3rd and from 7 a.m. ~ 7 p.m. from January 4th through 7th. Approximately 200 parking spaces are available through January 3rd.

Okinawa Narita-san Fukusen-ji Temple. 成田山福泉寺, promotes prosperity in business, traffic safety, good health and family safety.  It is located in Nakagusuku Village at 617 Ishado.  It will also be open 24 hours from December 31st through January 3rd, and from 6 a.m. ~ 8 p.m. from January 4th.  About 400 parking spaces are available.

About 160,000 people are expected to visit the Mabuni Fire and Bell Festival and pray for peace and “Pillar of Peace” from old anti-aircraft lights shoots to the sky.

Peace Memorial Park, the site of the last fighting during the Battle of Okinawa at Mabuni in 1945, forms the backdrop for the Itoman City Peaceful Illumination. Entry fee is ¥200 for adults and youth 15 and older. An estimated 160,000 are expected to trek south to absorb the splendor of more than 1.3 million lights in the display. There will also be fireworks on New Year’s Eve.

Even as the Itoman Peaceful Illumination is under way, plans are being finalized for the 38th Mabuni Fire & Bell Observance New Year’s Eve into New Year’s Day. The ceremonial festival takes place at Okinawa Peace Memorial Hall, which also stands in Mabuni, with prayers being offered to the 230,000 who died during the Battle of Okinawa. Just before the new year arrives, moments before the stroke of midnight, the flame of prayer will descend from the 45-meter-high bell tower to light participants’ torches as they welcome in the new year. As a choir sings, the Bell of Peace is rung as participants light the large flame holder with their torches. It’s a solemn, chilling festival that’s not to be missed.

As if that’s not enough, expect that every single Live House, restaurant, club and hotel has a New Year’s Countdown, including Carnival Park in Mihama. Parties cross into other parties throughout the weekend.

On New Year’s Day, and through January 3rd is the Shuri Castle special event, a three-day festivity that actually runs through March 1st. The re-enaction reproduces the ritual of the Ryukyu Dynasty, Amazake, tea and behavior of the Ryukyus appropriate for New Year’s. The Shuri Castle is only a 15-minute walk from the Shuri Monorail Station.

New Year’s Eve is a time for noodles. Toshikoshi soba noodles are believed to bring long and happy lives, and so are consumed in restaurants and homes around the island. The festivities continue New Year’s Day with Ganjijitsu, a time for more eating and drinking and sharing with families. Shogatsu is a serious family time, and relatives travel great distances to share even a few hours with each other.

Look for O-Zoni, a breakfast fare served New Year’s Day through the 3rd. O-Zoni is a mix of rice cakes in a vegetable soup, with the soup stocks varying from family to family. There’s also the traditional New Year’s dish, O-Sechi, something hard to describe since each family modifies the sweet boiled black beans recipe to meet its needs.

A most visible sign of the new year is the Kadomatsu, the pine decorations. You’ll find the Kadomatsu at entrances to homes, offices and restaurants, welcoming the God and the New Year. Look closely at the decorations and note the three bamboo shoots in the center, each with cut tips. Pine trees are part of the honors, too, because the local traditions trace back that pine trees remind everyone to be waiting for God, and that even in the midst of winter, all is fresh and bright.