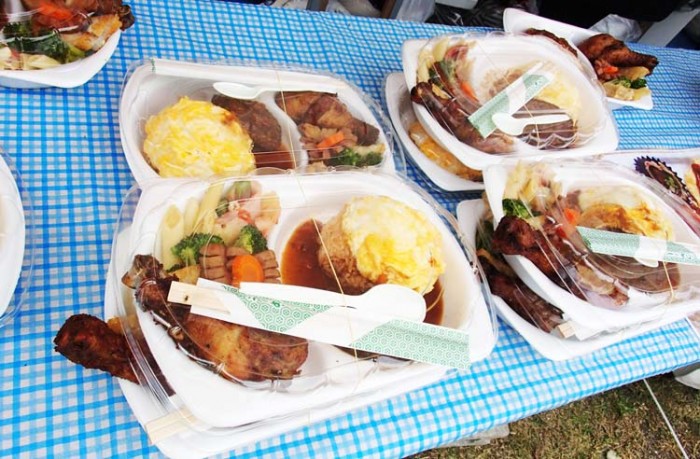 The lunches are presented as they are served every day.

The 4th Koza A Lunch Championship is only hours away, with Okinawan restaurants gearing up for a Sunday battle of the palates, with the public serving as the judges who determine who’s cranking out the best foods. 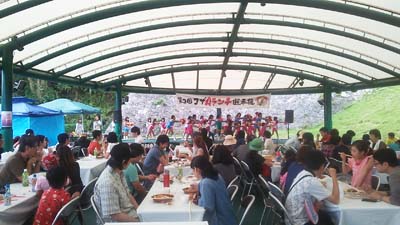 Entertainment is also on the menu.

It is a gourmet battle event.  Local restaurants will provide their specialty A Lunch plates.  People can enjoy a various kinds of plates like a basic A Lunch, of course, seafood A Lunch and a vegetable A Lunch for health-conscious people.   Visitors choose the best A Lunch for their tastes.  The event stems from an Okinawan typical local restaurant fare where people sometimes call one plate dish ‘A Lunch’ which includes 4~5 kinds of meals on the plate like a hamburger patty or pork or chicken cutlet for a main dish and salad and so on.  The name varies like A Lunch, B Lunch and C Lunch depending on the grade of side dishes and the number of dishes.

Sunday’s Koza A Lunch Championship takes place 11 a.m. ~ 8:30 p.m. in front of the open space at Koza Shinkin Stadium, Koza Athletic Park in Okinawa City.  Admission is free, but when visitors want to eat and drink, they must purchase tickets for ¥600 a piece, which includes a voting card. Dozens of restaurants, all of which offer original A-lunches, are participating and competing. Visitors compare tastes and decide the Grand winner by their votes.  Past winners include Drive-in Restaurant Hawaii of Sakimotobu, Motobu City, which took the A Grand Prix, and the Mexican and Steak House Lima Restaurant on Moromizato in Okinawa City.  The C-Grand Prix went to Olive Batake from Awase, Okinawa City. 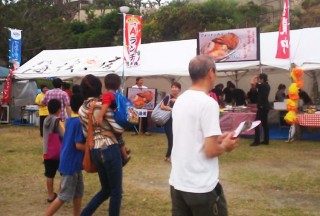 Participants can sample various menus for a fee before casting their vote.

The A-Lunch concept began in Okinawa following World War II, when an Okinawan chef returning from New York had the idea to create an A Lunch, B Lunch and C Lunch, denoting expensive, moderately priced and inexpensive set menus.  It caught on, and is now a mainstay in restaurants in Okinawa, and across Japan, for that matter.

The competition idea began in 2011, and was a hit.  It became even more of a fascinating draw for curious and hungry patrons, drawing more than 20,000 a year ago to sample the foods in Okinawa City, which can be easily described as the heart or hub of American-style eateries and foods