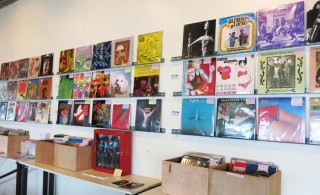 Those were the days… – Many people nostalgic for vinyl records and CDs will discover their fill of old memories at Cafe UNIZON Record Fair.

It is a second hand records fair, with four selected record shops on Okinawa holding special opportunities through March 2nd to mix and mingle with professional musicians, artists and deejays.

The Record Fair officially began last week, but big events are slated for February 27th.  The Talk Show and DJ event takes place that Friday night, with doors opening at 7 p.m. for an 8 p.m. show.  Advance tickets are ¥2,500 or ¥3,000 at the door, and need to order at least 1 drink each participants. Tickets are available at Café UNIZON, or by calling (098) 896-1060.

People who have a discerning ear, and often professionals from off island, visit the sponsoring shops.  Records are for listening of course, and they are also for purchase.  For a record fan, it would be so exciting to imagine what’s in it by its cover.

The Record Fair participating stores are

The participating stores are staging a very special talk show and DJ event on February 27th. The two nationally-known musicians,  music producer and film director from Tokyo will talk about records.    One of them is Yasuharu Konishi, a musician, music producer and DJ, and was a member of PIZZICATO FIVE that was a popular group in the 80’s and 90’s, and the other is Mitsuo Shindo. He is an art and film director, and did about 1,000 CDs and records of Japanese famous artists such as Yumi Matsutoya, Hikaru Utada and MISIA.  After the talk show, it is a DJ time! You cannot miss their DJ performance!