Ichiro Kikuta is one of the most famous painters in Okinawa, known for his talents with ink wash and the ability to create brilliant images with a single color.

Over the past several years he’s conducted exhibitions around the island, including at the Okinawa Institute of Science and Technology, at commercial department stores, and at the cultural ‘Nakamura House’, but this weekend he’s going a new direction.  He’s taking his works Saturday evening to Ada Elementary School, surrounded by rich nature and to be close to where he lives. Admission is free to the program at the school, 279 Ada, Kunigami Village, starting at 6 p.m. 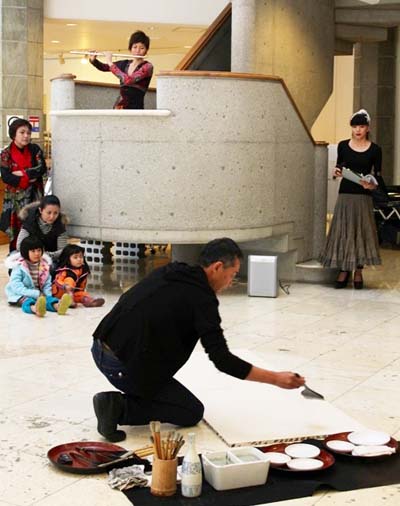 The live event will combine Kikuta’s painting with music and dance performances to create an audio-visual synergy.

Kikuta will create paintings live in front of the audience, assisted by Wong Chika, while jazz flute player Yukari presents flute music.  Kikuta calls the evening as the nature of Yanbaru.  The two painters will create two huge paintings 1.5 meters wide and 18 meters in length.  Also on the program is another performer, Kimiko, who will dance.

The professional painter says he wants people to attend and feel the atmosphere, particularly the essence of Yanbaru, during this green season.  Kikuta began his art career studying the Yamato ink wash painting style by Sotatsu Tawaraya of the early Edo era.  He opened his own studio in Ada in 2006, wrapping his styles around meditation concepts.  He’s a believer in understanding meditative states, including yoga and zen, and the perspective visualizing meditation.