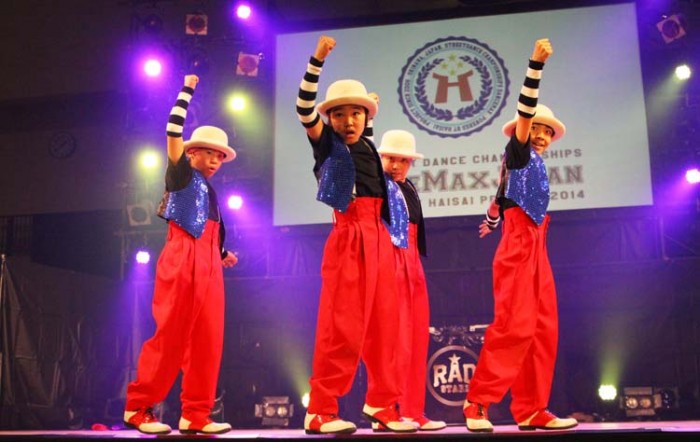 Many of the groups have trained for more than a year.

The 9th Street Dance Championship Dance Max Japan is bringing together dozens of pre-teens and teens to Tamagusuku Sogo Gymnasium in Nanjo City this Sunday.

This nationwide dance event is for children, having grown to its current 1,500 participants and a total audience of more than 20,000. Young dancers who passed the preliminary rounds for each area divided by five Japanese regions: Kanto, Tokai, Kansai, Kyushu and Okinawa, were chosen in January and February.   They are coming together to compete in dancing performances within a required three-minute program.

Admission is free for the competition, which sees doors open at the Tamagusuku Sogo Gymnasium, 200 Tamagusuku, Fusato, Nanjo City, at noon.  The program begins at 1 p.m. with emcees Q-Taro, Victoria Asami and DJ Hossie.  Guests will be Da Pump and 5th Elements.   Dance judges will be Shintaro (Beat Buddy Boi), Kenji (Pinocchio), Bezi (Busta Jakk Boogie), So (Be Bop Crew) and Kazuhiro (All Area/OGS).

Children participating are amazingly skilled and serious year after year, and in fact, have been preparing for the competition for a year.  There are two categories of the competition, one for kids who are 12 years-of-age and under, and teens who are of age18 and younger.  Basically, there’s one team per one block, a section of Japan that will dance in the final round, except for Okinawa. In the kids’ category, six teams, including two teams from Okinawa, and five groups in the teens’ category will compete this year.

In addition, there are five well-known and experienced dancers in the field of street dance. It would be expected people will listen to valuable comments of judges. As a special guest, new DA PUMP, a hiphop dance and vocal group, is coming and is scheduled to perform.  The main vocalist and the original member of the group ISSA is from Okinawa and popular nationwide in not only for his dance and singing but his entire lifestyle.