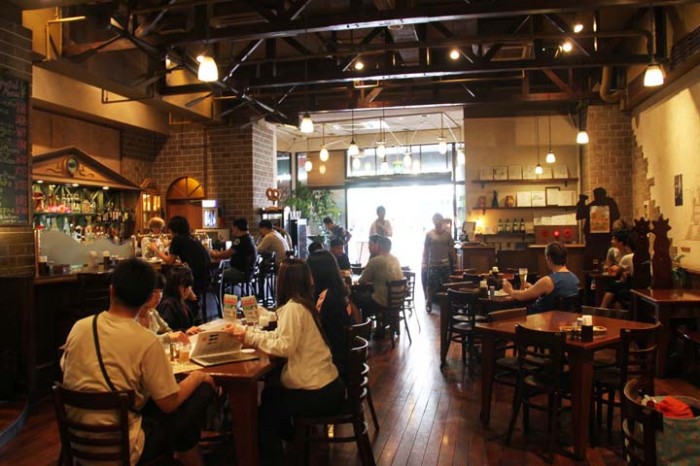 Helios Pub offers an oasis in the middle of the busiest Naha shopping district.

Helios Pub, a popular craft beer pub in the Makishi district on Kokusai Street in Naha City, is reopen after a bit of renovation following its successful beer festival, and already serving special craft beer made in Okinawa.

Helios pub serves delicious food and snacks that are especially matched with their craft beers.

To celebrate, Helios is hosting a special Champagne fair, inviting patrons to give their Champagne Pierre Paillard Brut Grand Cru a try for only ¥750 a glass.  Another option being offered is Black Velvet, a cocktail combining beer with champagne, for ¥950.  A bottle of champagne is ¥8,000, taxes not included.  Helios officials say they’ll be running the champagne special for about one month.

The Helios distillery is one of the major Awamori distilleries in Okinawa, known for popular products like “Kura” or “Todoroki”. Helios distillery started in 1961 with producing their own Rum as their first product. Catering to the U.S. Military market. Okinawa is an island known as a producer of sugarcane, and Tadashi Matsuda, the Helios founder, started making rum because of his personal policy that all production should be accomplished using local ingredients.

The pub is located at about midpoint of Kokusai Street in Naha.

Since then, Helios has been adding to their production line with Awamori, craft beer, shochu and Habu sake. Helios pub opened in1996 on Kokusai street to serve their fresh and local craft beers to as many beer lovers as possible, not only Okinawans but an increasing number of visitors from outside of the prefecture. The pub image is much as an English local pub, and visitors tend to take a very relaxing time at the pub. Guests can choose 350ml regular glasses for ¥500, 650ml tall glasses for ¥700 and the mass, a one-liter jug, for ¥1,428. Helios also offers trial sets that are a choice of three kinds of beers, 150ml each, for ¥667.

There are various food menus that include tasty sausages, Okinawan pork, fish and chips, salads, garlic sticks and much more! Whether alone or with family, friends or partner, Helios says it’s the place for “making fun time really great!”  The Helios Pub is open 11:30 a.m. ~11 p.m. weekdays and 11:30 a.m. ~ midnight on Fridays and Saturdays. Yen and major credit cards are accepted. Call (098) 863-7227 for reservations. An English menu and English speaking staff are available. Map: https://goo.gl/maps/efRJp.