Japanese mayonnaise is good on everything 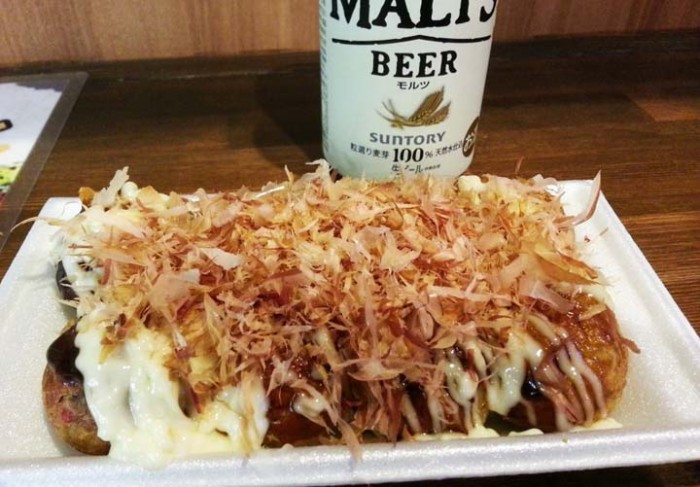 Mayonnaise is as essential on Oksaka Takoyaki balls as are the tuna flakes.

Growing up in North America, Mayonnaise was not something I relished and craved but definitely was a third tier specialty for sandwiches, losing out only to the beloved North American classic condiments; ketchup and mustard. 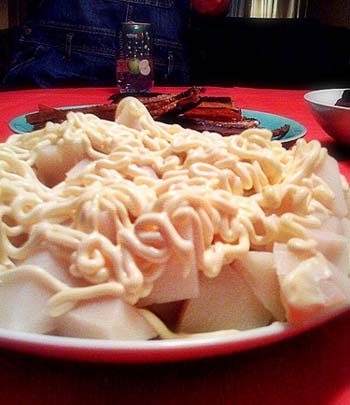 Japanese are generous with their use of mayonnaise as here on a plate of bamboo shoots.

Mayonnaise, often referred to as “Mayo”, “Miracle Whip” or “Hellman’s” has long held its stronghold on the fridge shelves of most North American households. (Note: We will not be getting into the Hellman’s mayo vs. Miracle Whip debate here.) When it comes time to prepare the next meal, it has often been a common habit for most of us to open the fridge door, scan the items lined up on the shelves while considering our options for the next grand meal creation.  Surveying the jumbled array of food items, every so often my eyes will stop, transfixed on the American Mayo that has inconspicuously taken its place at the back of my fridge shelves. How long has this jar of mayonnaise been holding its position there? Had it been months or years since I had last broken the seal on the lid to plop out a dollop of its dense white gooey contents?

Before moving to Japan, I had no idea that the Japanese had their own version of mayonnaise. Personally, mayonnaise has always been the forgotten condiment at the back of the fridge; only called upon for that less than frequent tuna or chicken salad sandwich. Little had I known that mayonnaise has been a staple of the Japanese diet since 1915.

The first evidence of a jar of Japanese mayonnaise sits on a shelf in the Mayonnaise Museum in Tokyo.  Next to it stands a round-bellied Kewpie doll, the official mascot for Kewpie mayo.  ‘Kewpie’ was the first Japanese mayo brand which was ‘officially’ launched in 1925.  Believe it or not, the museum website warns that there is up to a two-month waiting list to tour the Kewpie bottle container-shaped museum.

Kewpie has been the king of Japanese mayonnaise market for almost a century.

Hopefully this helps you start understanding the importance of mayonnaise to the Japanese culinary culture.  In Japan, those who are known to regularly indulge in this not-so-healthy/consume-in-moderation condiment, are often referred to as “maiyora’ by friends and family.

Many countries claim their own version of the oily white condiment.  Each have their own variations on the basic ingredient list, taste and texture which they feel is the way that mayo should be created.  The difference between Japanese and American Mayo comes down to these factors. The recipe for mayo is pretty simple but there are a few vital ingredients in the Japanese mayo that differ from it’s American equivalent.

American mayo is usually made from a soy-based vegetable oil that is blended with water, eggs, distilled vinegar, salt and sugar. In contrast, Japanese Mayo does not have any water added to it.  They use apple or rice vinegar instead of distilled vinegar, and they only add the yolks rather than the whole eggs. Using egg yolks and apple or rice vinegar while eliminating water gives Japanese mayonnaise a thicker, denser consistency than its American counterpart. The Japanese mayo is a rich and a slightly sweet condiment. Most manufacturers of the Japanese Mayo also use MSG (Monosodium Glutamate) which is a flavor enhancer which works to stimulate the taste buds and makes everything taste better while coming with the unfortunate side effect of possibly shaving a few years off your life.

Some of my favorite dishes to add any type of mayonnaise to are sandwiches or hamburgers, or have it mixed with a can of tuna or use to create a mean chicken salad.

People living or visiting this country may have noticed that the Japanese tend to have a bit of an obsession with mayonnaise.  This can be noticed in the variety of products that are available in mayo flavors.  There is mayo flavored ice cream and potato chips. Who needs tomato sauce when you can make mayo spaghetti sauce? Some other honorable mentions would be mayo pizza and my personal favorite mayo flavored pancakes. Pretty much anything edible can be blended here with mayo.

If you have never tried Japanese mayonnaise, the best brand to buy is called Kewpie. Kewpie mayo has held on it’s own on the store shelves for almost a century. It’s immediately recognizable see-through bottle with a poppy red colored ‘plump’ and jolly Kewpie baby doll on the bottle. The Kewpie mascot seems to have been spending some time indulging on it’s own product, hence the ‘Pillsbury dough boy’-style body rolls.

Consumers of this product should take this image as a warning of how you body may start to morph if you do not regulate the amount of Kewpie you spurt out over your meals.  If you plan to consume copious amounts of mayo, remember that you will probably want to add a few more gym sessions to your workout schedule to keep ahead of the Kewpie body morph.

When in Rome, do as the Romans do and my suggestion is to indulge in Japanese Mayonnaise while you are here.  But, take this as a forewarning.  When visiting or returning to North America, you will find yourself searching the condiments aisle for the familiar Kewpie condiment, and be hopelessly distressed when all you find are rows of empty blue-faced Hellman’s or Miracle Whip jars, minus the fat jolly Kewpie baby that you had become so accustomed to smiling back at you as you snatched him off the shelves back in Japan. Your diet may have to take a back seat the next time that you slather ample amounts of mayonnaise on your pizza, curry, or spaghetti but your tastebuds will be thanking you for allowing them this simple Japanese culinary indulgence.